The fall out from "Gerboise Bleu", 60 years after the first French A-Bomb 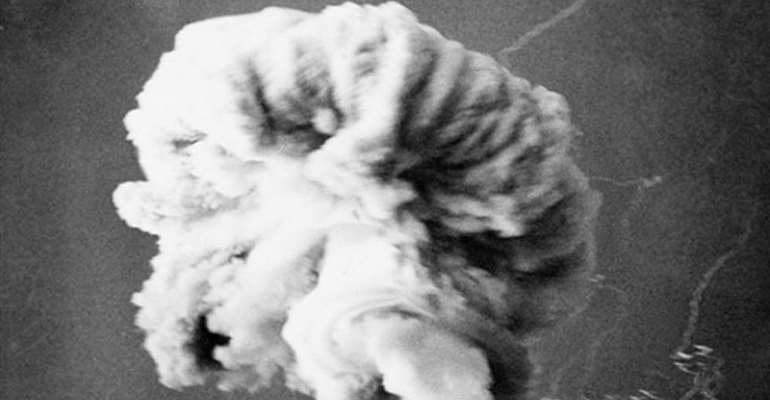 Thursday 13 February 2020 marks the 60th anniversary of the first French nuclear test in Algeria. To be followed-up later in 1960s in French Polynesia, the experiements turned France into one of the world's foremost nuclear powers. But seven decades on, thousands of victims are still waiting for compensation from the French government.

The operation, authorized by then-President General Charles de Gaulle, took place at 0704 GMT on 13 February 1960 and was about four times more powerful than the Hiroshima bomb.

"Hurray for France," de Gaulle wrote at the time.
French authorities continued to use the Reggane site for the next three atmospheric tests, but this soon triggered severe condemnation from other African nations, forcing the government to take its nuclear testing underground.

However, in 1962 further controversy broke out after an underground nuclear blast named "Beryl" dispersed radioactive rock and dust into the atmosphere, which victims say left a legacy of environmental devastation and health problems that linger today.

In 1996, then-President Jacques Chirac called a halt to nuclear testing.

Most experiments took place in French Polynesia. But 17 took place in Algeria between1960 and 1966, ending just four years after Algeria's independence from France.

Activists maintain that testing sites are still contaminated, with many just fenced off by barbed wire, at best.

Waiting for compensation
Altogether, between 27,000 to 60,000 people from communities surrounding the test sites were affected, according to one media report.

France's nuclear compensation commission, CIVEN, said more than 1,600 claims have been filed under a 2010 French law that finally acknowledged health problems linked to the tests.

To qualify, victims need to prove that they have a minimum level of exposure to weapons tests and suffer from one of two dozen possible types of cancer.

Of the 51 claims from Algeria, only one claim has been honoured.

The unresolved fallout of the nuclear explosions has fed into longstanding tensions between Paris and its former colony.

In 2017, French President Emmanuel Macron acknowledged that France's colonialisation of Algeria had been a "crime against humanity."