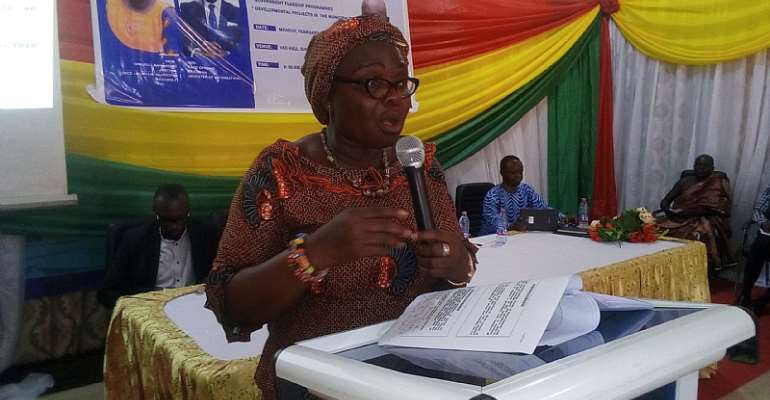 The Ministry of Information with its aim of ensuring that effective communication plays a major role in the national agenda has designed the Metropolitan, Municipal, and District Assemblies (MMDAs) to disseminate government information nationwide and to also receive feedback and engage the citizenry at the local level.

The MMDCEs were to organize the programme and render account of their stewardship from 2017 to date to the people through the media.

This, according to the Information Ministry, should have emphasis on flagship programmes of the government and provision of account of development projects with pictorial evidence of projects executed during their reign within their respective jurisdictions.

In response to the call, the Sunyani Municipal Assembly held its MEET THE PRESS SESSION on Monday, February 24, 2020 at the VAG Hall where about 42 journalists, 15 stakeholders including representatives from the Sunyani Traditional Council and other institutions, Heads of Department and Unit Heads as well as the Regional Information Officer and representatives from the Bono Regional Coordinating Council were in attendance.

In his welcome address, the Sunyani Municipal Coordinating Director, Kingsley Kofi Sencherey stated that, the Municipal Assembly, under the leadership of the Municipal Chief Executive has carried out a lot of developmental and social projects and would need the media to make it known to the public hence the meeting. He said, the doors of the Assembly are opened to all media practitioners and the general public for any information and clarification of issues.

The Bono Regional Director of Information Services Department (ISD), Imoro Tebra Ayibani who represented the Minister for Information, Hon. Kojo Oppong Nkrumah charged the media to be circumspect in their reportage and go by the ethics of the profession. He said, this is an election year and any little unbalanced and unverified reportage could trigger political chaos in the country. ‘This is why we must apply all the techniques in writing our reports by verifying and researching thoroughly before publishing and or broadcasting our stories’, he implored.

Mr. Imoro further urged the media to focus more on the positive things the Assembly is embarking upon rather than always portraying the negatives. This, he said, would attract investors to invest in the Municipality thus creating jobs for the people. The results, he said, would be rapid development in transforming the lives of the people.

In her presentation, the Sunyani Municipal Chief Executive (MCE), Hon Justina Owusu Banahene disclosed that, her outfit has undertaken a lot of projects in the areas of Education, Health, Agric, Sanitation, Revenue, Roads as well as some social interventions and stressed the need for the electorates to renew the mandate of the NPP administration to complete its promise for the nation.

Though admitting that inability to charge realistic rates due to non-valuation of most properties, huge sum of Assembly’s finances spent on waste management and problem of land management without recourse to the planning scheme due to different land ownership as some serious challenges the Assembly is encountering, Hon. Banahene championed the need for Nananom to join hands with the Assembly in the collection of Revenue and find a lasting solution to their land tenure disputes while challenging the media to play the advocacy role in due course for the development of the municipality and Ghana as a whole.

There was an open forum where the media asked pertinent questions on issues bothering their comprehension of which equal responses were given them by the high table and some Heads-of-Department concerned.