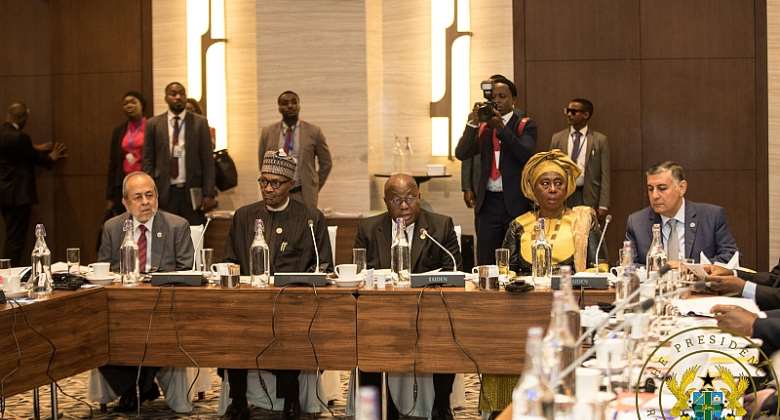 President Akufo-Addo has assured the Assembly of Heads of State and Governments of the African Union that the Secretariat of the African Continental Free Trade Area will be operational by 31st March, 2020.

Making an intervention on Sunday, 9th February, 2020, during the closed session of the 33rd AU Summit, currently ongoing in Addis Ababa Ethiopia, President Akufo-Addo indicated that Ghana, after being selected as host country for the Secretariat, was “directed to work with the AU Commission to ensure an expeditious and efficient process of establishing a permanent Secretariat for the AfCFTA in Accra by 31st March, 2020”.

Outlining the activities that being undertaken by Ghana, to this end, the President indicated that the reconfiguration of the Office Premises based on the specific requirements agreed with the AU Commission, including the installation of critical Data and IT Infrastructure facilities, Security Systems, Office Furnishing, and Corporate branding of the AfCFTA Office Complex, has been done.

Secondly, he told the Assembly that “the acquisition and furnishing of the residence of the Secretary General of AfCFTA, based on the requirements agreed with the AU Commission” has been completed, with the “initiation of negotiations with real estate companies for residential accommodation for other AfCFTA staff.”

In addition to the finalisation of arrangements of health and educational facilities for AfCFTA management and staff, the President stated that a dedicated booth at the Kotoka International Airport, Accra, to facilitate entry and exit requirements of AfCFTA officials, as well as representatives of Member States, who will be conducting official business with the AfCFTA Secretariat, has been secured.

The President reiterated Ghana’s determination “to establish the Secretariat by the end of March 2020, which will be of world class quality, and to help ensure that, by 1st July, 2020, as mandated by the Assembly, the AfCFTA takes off without a hitch.”

COMSATS
Earlier on Sunday, President Akufo-Addo held a meeting of Member States of the Commission on Science and Technology for Sustainable Development in the South (COMSATS).

With Ghana serving as Chair of COMSATS, the President told Heads of State and representatives of 27 Member States that the purpose of the meeting was to ensure that Member States recommit themselves to the work of COMSATS, and to reposition the Commission to support the collective drive for development, leveraging science, technology and innovation.

“In the twenty-five years of its existence, COMSATS has played a lead role in cultivating an enhanced culture of scientific and technological co-operation amongst its Members, through capacity building, education and research and development,” he said.

The President continued, “The pivotal role science and technology play in development is well acknowledged. Together with innovation, they have become the new currency for development. Science and technology hold the key to finding sustainable economic, social and environmental solutions to the many problems that confront us. And these problems are shared – from Algeria to Zimbabwe, and from Benin to Tanzania, we face common problems.”

He was confident that COMSATS is well situated to help foster greater partnerships to advance science and technology for the development of Africa.

With one of the key objectives of Agenda 2063 being to transform Africa into a strategic player in the global economy, President Akufo-Addo was certain that this could be achieved through improved education and application of science and technology in development.

With the meeting serving as a precursor to the General Meeting and the Forum on Science and Technology, which will be held in Accra on the 14th and 15th of April, 2020, President Akufo-Addo urged Member States to “join us in Ghana for the General Meeting.”