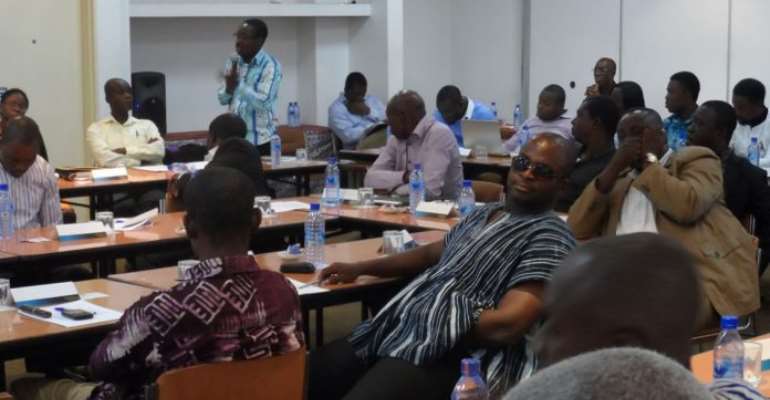 The Holy City Foundation, an NGO, has held and advocacy action session at Kintampo in the Bono East region with support from the BUSAC fund, the European Union (EU), the United States Agency for International Development (USAID) and DANIDA.

Dubbed, “Advocacy For Inclusion Of Artisans During Fee Fixing Meeting By Kintampo Municipal Assembly To Increase Tax Revenue”, the programme was to enable active participation of artisans in fee fixing to ensure consensus in the amount being fixed and minimize tax evasion.

Participants at the session has been asked the Kintampo Municipal Assembly to promote transparency and accountability in revenue generation and expenditure through quarterly social accountability forums and town hall meetings.

They also advised the Assembly to ensure the effective functioning of client service charter as well as the business advisory centre to provide guidelines of cost minimization and profit maximization in business through capacity building training of SMEs.

The programme which took place at Kintampo, was an advocacy action was followed by research to ascertain the extent to which artisans are included in fee fixing meetings of the Kintampo Municipal Assembly.

It came out after the research that After the research, that the majority of SMEs in the study area are artisanal and are dominated by male while more than 50% of the SMEs have registered their businesses and effectively pay their taxes.

Besides, majority of respondents had no knowledge on assembly fee fixing resolution or social accountability forum and also think that there is lack of probity and accountability in the Municipal Assembly’s internally generated fund mobilization and disbursement as the research revealed 87.39% had no information on IGF.

It also came out that the problem of non-participation coupled with mal-functioning of client service charter and business advisory center hinder SMEs in fully acquiring fair knowledge about amount of fees to be paid and strategic ways to maximize profit.

This creates a situation of dissatisfaction and disagreement in fee fix and also leads to tax evasion, disabling the Kintampo Municipal Assembly to mobilize enough revenue, and consequently, does not achieve its target of IGF, nonetheless to extend the target.

At the end of the programme, it was agreed that the Kintampo Municipal Assembly should find an efficient way to communicate and interact with artisans and include them in their fee fixing meetings.

The Assembly also agreed to be organizing the fee fixing meeting every year, enforce bye-laws that would help the Municipality to increase its tax revenue and intensify educational programs to the public for them to understand the workings of the Assembly and annual plans.