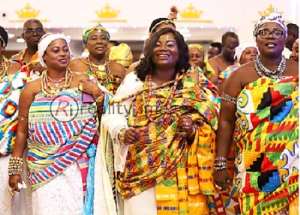 The Director General of Police Welfare, COP Maame Yaa Tiwaa Addo-Danquah, has been conferred the title of development queen mother by the chiefs and people of Aflao in the Volta Region.

The Paramount Chief of Aflao, Fiator Hukportie VIII, conferred the stool name Ngorgbeyiyifia Mamaga Adzakpa I on her at the Perez Dome in Accra on Sunday, January 26, 2020.

Fiator Hukportie revealed that the conferment was in recognition of COP Tiwaa's contributions to the Aflao Traditional Area.

He said the immediate past Director General of the Police Criminal Investigation Department (CID) has shown magnanimity and generosity to humanity in both her public and personal life.

In his sermon, Presiding Bishop of Perez Chapel International, Charles Agyin-Asare, used the story Bible story of the daughters of Zelophehad and emphasized power and uniqueness, stressing that the five daughters boldly approached Moses, Eleazar the priest, the chiefs and the entire congregation at the Tent of Meeting.

He explained that the daughters ‒ having faith and trusting in God's provision for them ‒ did not live for the present but had faith that they could be used by God to bring about change.

Galamsey Saga: All Missing Excavators Would Be Brought Back ...
57 minutes ago