2020 State Of The Nation Address Set For 20th February 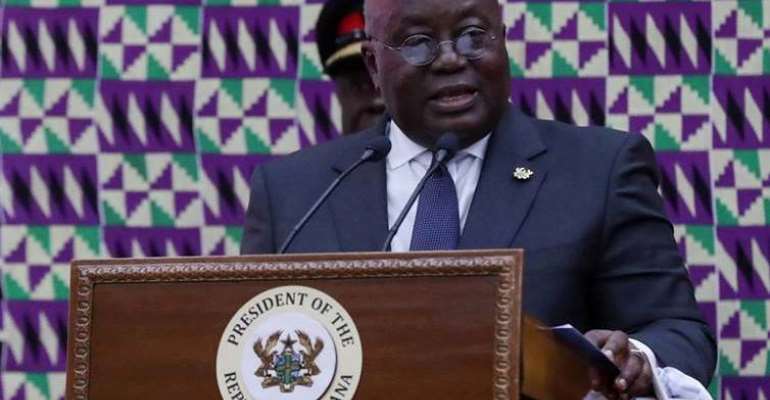 The Majority Leader and Minister for Parliamentary Affairs, Hon. Osei Kyei-Mensah Bonsu, has announced that the 2020 edition of the State of the Nation Address will be presented by the President Nana Akufo-Addo on Thursday, February 20, 2020.

President Nana Addo Dankwa Akufo-Addo will address parliament to give an account of the current state of the nation.

The delivery of the 2020 State of the Nation Address is in accordance with Article 67 of the 1992 Constitution of the Republic of Ghana and the Standing Orders of the Parliament of Ghana.

“Mr. Speaker, the House would also receive His Excellency, the President of the Republic in February 2020, when he attends upon Parliament in accordance with Article 67 of the Constitution to deliver a message on the State of the Nation”, Osei Kyei-Mensah Bonsu said.

The State of the Nation Address gives Ghanaian Presidents the opportunity to account for their stewardship.

Notable in his 2017 presentation, President Akufo-Addo accused the Mahama administration of increasing the country's debt stock to about GHc122 billion from GHc9.5 billion in 2009.

The President noted that the previous government missed almost all the International Monetary Fund targets, while leaving the country with a debt stock of GHc122 billion, including a $2.4 billion debt in the power sector.

President Akufo-Addo also held that Ghana's economy was in a dire state because the National Democratic Congress (NDC) government had left the country with a GDP rate of 3.6%, which was the lowest the country had recorded in the past two decades.

Among some of the critical targets met, the Akufo-Addo administration was able to roll out the Free Senior High School policy, restored both teacher and nurse trainee allowances, and ensured the review of electricity tariffs.

2018 State of the Nation Address

The most recent State of the Nation address by President Nana Akufo-Addo, contained some projections and proposals, notably when he spoke on sanitation, the creation of new regions, the state of the eastern corridor road, among others.

He also reiterated the efforts and strategies underway to put the economy on a sound footing, improve agriculture, enhance road network, revive the country's rail network, the health sector, as well as give real meaning to the fight against corruption.

The President indicated that the debt accumulation, which, in recent years, had been as high as 36%, had declined to 13.6%, as of September 2017.

On job creation, the President said the government had put in place structures to help small and medium scale enterprises and budding entrepreneurs go through the challenging start-up years.