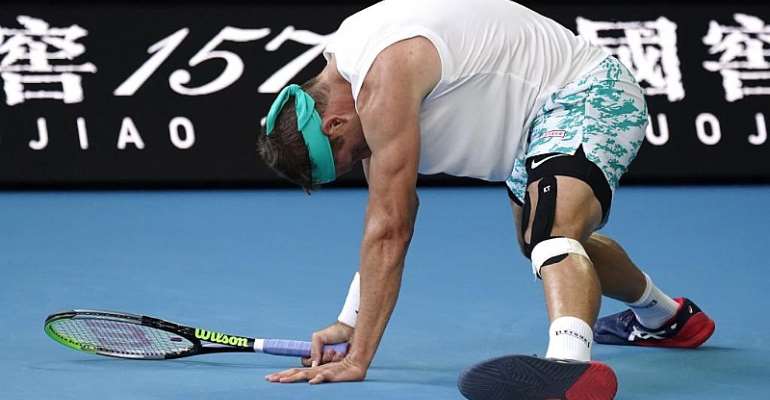 Roger Federer saved seven match points on Tuesday as he advanced past Tennys Sandgren to the semi-final of the Australian Open. Federer, seeking a 21st Grand Slam title, faced elimination three times as he served to level the fourth set at five games apiece.

After surviving those scares against the world number 100, he fought off four more match points - three of them consecutive - during the fourth set tiebreak which he eventually won 10-8.

Federer took the decider 6-3.
"Once he could see the finish line being a real thing, I thought his level picked up as my level was decreasing," said a disconsolate Sandgren after the three and a half hour match.

Experience
"It's to be expected when you survive that many times. You can't give a good player or maybe the best player ever that many chances to come back. They're going to find their game and start playing well and that seemed to me what happened."

Federer's attributed his near demise to a groin problem which started to affect him early in the match. The 38-year-old took a medical time-out during the third set.

"That set was pretty much gone anyway when I took the time-out," recalled Federer. "I figured that in the fourth, things could go away quickly or maybe I'll hang around for a bit.

"But for the most part I thought that was it. Only after I won the fourth did I think that maybe this whole thing could turn around."

Milestone
The comeback at the season's first Grand Slam tournament allowed Federer to reach his 46th semi-final at the circuit's four most prestigious events.

He will play the defending champion Novak Djokovic who deconstructed the 32nd seed Milos Raonic 6-4, 6-3, 7-6.

"What Roger did was really amazing," said Djokovic. "To come back and save seven match points at his age. He's still playing such a great tennis and proving that he deserves to be up there. He's a great fighter. Obviously I have lots of respect for him."