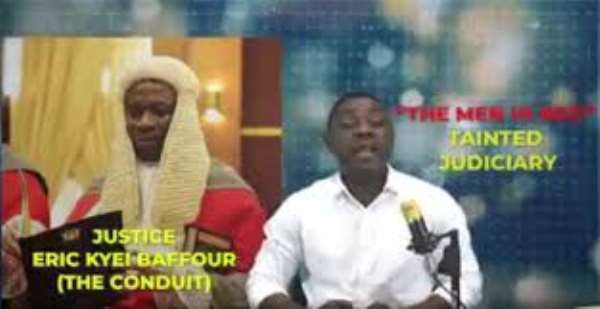 The first accused person in the ongoing case between the state, Eugene Baffoe-Bonnie and four others has petitioned the Chief Justice Justice Anin Yeboah asking Justice Eric Kyei Baffour before whom the case is being heard to recuse himself over possible unfair judgement.

The petition dated the 20th of January 2020 and signed by the petitioner, Mr. Eugene Baffoe-Bonnie, is entitled “Petition for the Recusal of his lordship Justice Eric Kyei Baffour in suit no. CR/904/2017 – The Republic versus Eugene Baffoe-Bonnie and 4 others and Transfer of the Suit to another Justice for Trial”. The petition is a ten (10) page document and has thirty-two (32) paragraphs.

According to the petition, the main premise upon which the Accused person has decided to petition the Chief Justice is a social media video of one Kelvin Ekow Taylor posted on a Facebook wall called “With All Due Respect”.

Justice Eric Kyei Baffour on the 16th of January 2020 issued an arrest warrant for the controversial social media commentator, Kelvin Ekow Taylor, for him to be presented in his Court to answer why he should not be committed to jail for comments he made concerning the NCA trial which is pending before him.

In a recent episode of his social media video reportage called, “With All Due Respect” and dubbed, “The Men in Red, Tainted Judiciary,” Kelvin Taylor picked on the Court of Appeal Judge, Justice Eric Kyei Baffour and made several allegations against him and the ongoing trial.

“Today I will tell you about the men in red, yes the men in red and how some of them have been compromised,” Kelvin Taylor said in his introduction in the said video.

The social media commentator further zeroed in on a case before Justice Eric Kyei Baffour entitled the “Republic versus Eugene Baffoe-Bonnie and four others” indicating that he is deliberately twisting the law as far as proceedings in that case is concerned to favour the current NPP administration.

“Justice Eric Kyei Baffour was hurriedly promoted from a High Court judge to a court of operating on the orders of President Akufo Addo and the National Security Minister, Kan Dapaah. This is why the case of the former NCA board members was jumped straight to the Commercial Court to Kyei Baffour so that he will execute government agenda. This is basic. With all due respect my fellow Ghanaians, Justice Kyei Baffour is seriously doing the bidding of the President and more importantly the bidding of the National Security Minister, Mr. Kan Dapaah,” Kelvin Taylor said.

Kelvin Taylor also alleged that the Court of Appeal judge, Justice Eric Kyei Baffour, has recently built a mansion in Accra that has become “the talk of the town.”

“Justice Kyei Baffour has become too powerful and too rich in this short time. He recently built one of the most expensive mansions in Accra which in fact has became the talk in the corridors of the Justice Department,” Taylor said.

Justice Eric Kyei Baffour in issuing the arrest warrant said due to the fact that the said Kelvin Taylor is not in the Ghanaian Jurisdiction, the warrant will hold until Kelvin Taylor is arrested and presented to his court or until he no longer exists on planet earth.