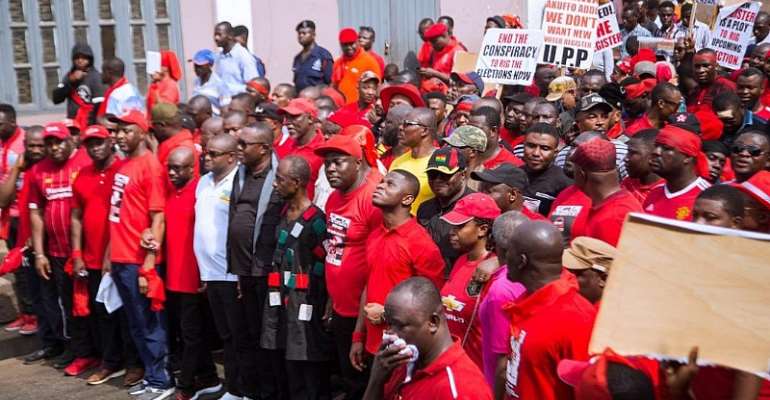 It is rather absurd that the very Asantehene, His Majesty, Otumfuo Osei-Tutu, II, whom the Presidential Candidate of Ghana’s main opposition National Democratic Congress (NDC), Mr. John Dramani Mahama, only a couple, or so, months ago, told the entire global community was a flat-out congenital liar, in the wake of the Asantehene’s well-received testimony before the United Nations’ General Assembly, that he had played a significant and an instrumental role in prevailing over a distraught and thoroughly defeated incumbent President Mahama to concede defeat to then-Candidate Addo Dankwa Akufo-Addo, in the wake of the 2016 Presidential Election, should be converging on his Manhyia Palace to solicit the support of Otumfuo Osei-Tutu in a bid to preventing the auspicious establishment and the salutary development of Ghanaian democracy (See “Voters’ Register: ‘Yenpini’[sic] Demonstrators Run to Otumfuo” News Desk – Modernghana.com 1/22/20).

Earlier on, another news report had been posted on the Modern Ghana website in which the NDC’s operatives, the stagers of Tuesday’s demonstration in the Asante Regional Capital of Kumasi, scandalously claimed to represent the will of the Ghanaian people, conveniently ignoring the all-too-verifiable fact that the Mahama-led National Democratic Congress had lost the 2016 General Election by more than One-Million Votes! Maybe Mr. Johnson Asiedu-Nketia, the dynastic General-Secretary of the National Democratic Congress, who recently graduated from the Ghana Armed Forces Senior Staff College with a Master of Science Degree in Security and Strategic/War Studies, also needs to enroll into the Political Science Department at the University of Ghana to obtain another graduate degree in what a “political mandate” means in a Constitutional Democracy such as Ghana’s.

Indeed, if any legitimately registered and recognized major Ghanaian political party can proudly declare that it genuinely “represents the will of the people” presently, that party is definitely the Akufo-Addo-led ruling New Patriotic Party (NPP), and not the thoroughly routed kleptocratic Mahama-led National Democratic Congress. You see, having introduced themselves to the Ghanaian political terrain by means of terrorist usurpation and butchery, including the barbaric Mafia-style assassination of the Three Akan-Descended Accra High Court Judges, namely, Justices Cecelia Koranteng-Addow, Kwadwo Agyei Agyepong, and Frederick Poku-Sarkodie, the leaders of the Jerry John Rawlings-founded National Democratic Congress have woefully, albeit predictably, failed to heed the far more civilized and civically responsible admonishment of Dr. Kwadwo Afari-Gyan, the Rawlings-appointed longtime Chairman of the Electoral Commission (EC), that any political party, or even individual Ghanaian citizen, who has any grievances against the administrative operatives of the EC, would be better off taking such grievances to a legitimately constituted court of the land, and not stolidly taking the law into their own hands, such as the Mahama/Asiedu-Nketia Gang is doing presently, by inadvisably resorting to a criminal disturbance of the public peace.

It ought to be crystal clear to the overwhelming majority of Ghanaian voters and the citizenry, by now, that Candidate Mahama and his so-called National Democratic Congress have already lost the 2020 General Election by more than Two-Million Votes. These criminal architects of the Judgment-Debt Mega-Heist Racket would have Ghanaians believe that the necessary compilation of a clean and credible National Biometric Voters’ Register (NBVR) is flagrantly tantamount to the wasteful spending of the taxpayer’s money. What chutzpah!

I weep for Ghana for allowing Medusa-like head judgement de...
33 minutes ago