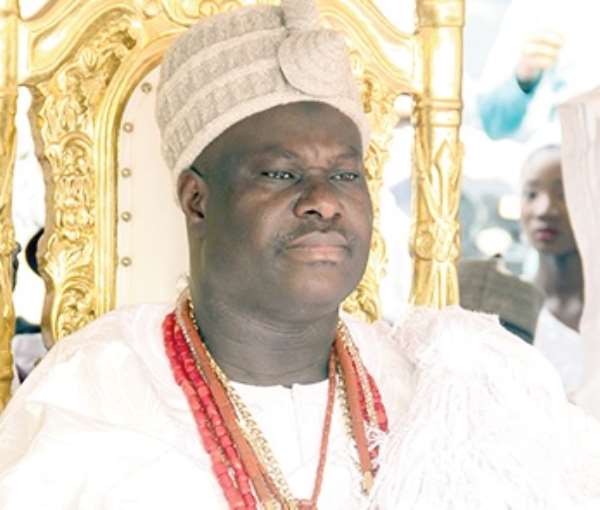 This was during a title-bestowing ceremony on some personalities from the Yoruba community held at the forecourt of the State House on Sunday.

Dr. Bawumia, during the colourful ceremony, called for enhanced unity between Ghana and Nigeria as he recalled the historical bonds that bind the two countries.

He remembered the late Alhaji Rahimi Gbadamoshi, one-time headmaster of Government Secondary School now Tamale Senior High School, one of the Ghanaians with Yoruba ancestry and how he, as he put it, “made what I am today.”

The Vice-President's sense of humour was in full flight as he turned to soccer and recalled how in spite of the sisterly relationship between the two countries football separates them.

In his speech, the Ooni of Ife also called for unity between Ghana and Nigeria, adding that before colonization of West Africa “we had kingdoms. Let us maintain the cordial relationship existing between us. History teaches us that the Gas are part of Ife from where they migrated to their present place of abode. This should further bind us together as one people.”

Sunday's programme was a display of the characteristic love for colour by the Yoruba people of Nigeria.

Being one of top African Kings, the Ooni of Ife arrived in Ghana with a large retinue of his court officials and minders who displayed the culture of the Yoruba amid appellations.

Also in town for the historic event were the Kwara State Governor, Mallam Abdulrahman Abdulrasak, and the Olofa of Offa ( the latter is one of the major towns in Kwara State from which many Ghanaian Yorubas trace their ancestry), Dr. John Kayode Fayemi, Governor of Ekiti State.

Tributes were paid to Alhaji Dr. Ahmed Vanderpuije and his wife Alhaja Mrs. Risikatu Vanderpuije for their singular financing of the programme whose second segment was a lavish dinner at Kempinski Hotel. The former was bestowed with the tile of Balogun of Yoruba, Ghana and Baba Adini of Ghana. His wife got the title of Iyalode of Ghana.