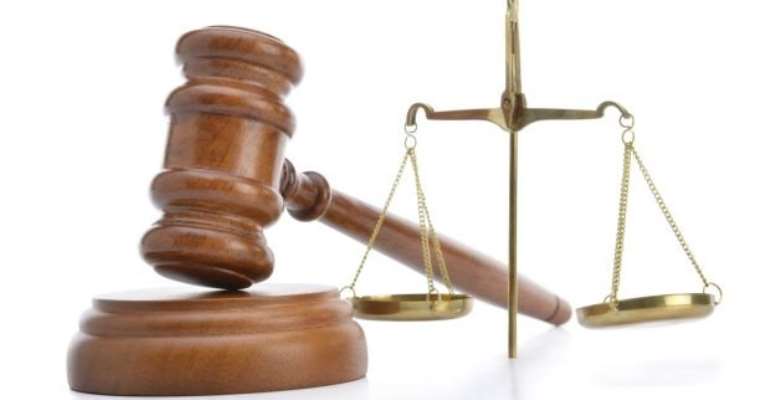 A 40-year-old woman, Felicia Nyaama, is in the grips of the law for allegedly causing harm and additionally issuing death threats.

Following this development, a Circuit Court in Accra has granted her bail in the sum of GH¢8,000.00 with two sureties.

The accused pleaded not guilty to the charges and would reappear in court on February 17.

Mrs Susana Eduful, sitting as a relieving Judge presided over the case

Prosecuting, Police Chief Inspector Emmanuel Haligah told the court that both Emmanuel Akake, the complainant and Nyaama are artisans as well as relatives.

He said Akake resides at Chorkor whilst Nyaama lives near the Arts Centre, all suburbs of Accra.

Chief Inspector Haligah said on December 25, 2019, the complainant accompanied by one Billia Caroline Sonaya, his girlfriend, were heading to a drinking spot at the Arts Centre when the accused who was seating at a friend’s shop asked Sonaya to return to her shop and stop following men.

He said the complainant and his girlfriend returned to their separate shops but later the accused person went to Sonaya’s shop and told her to stop dating the complainant because he was a womanizer.

The prosecution said Sonaya then informed the complainant about the accused’s warning for her to stop seeing him.

Prosecution said on December 30, 2019, the complainant went to the shop of his elder brother to inform him about the behaviour of the accused and the need for her to be advised.

The Prosecution said the accused whose shop is a few meters away from that of the complainant’s elder brother saw the complainant and went to the there, where she intentionally and unlawfully pushed the complainant who fell on his left hand.

He said the complainant had a fracture as a result of the fall and made a formal report to the police where he was issued with a medical report form to attend hospital.

Chief Inspector Haligah said whilst investigations was ongoing, the complainant reported back to the police on December 31, 2019, that at about 2000 hours he returned from Tudu and saw that his shop at the Arts Centre was locked. He was assisted by one Safianu Osman to open it.

He said when the complainant was about to enter the shop, the accused, who was passing by the complainant’s shop without any provocation, threatened him by saying “I will kill you and go to jail”.

The prosecution said she again intentionally and unlawfully picked a stone and hit the complainant’s head with it, injuring him in the process.

He said the accused person was subsequently arrested and arraigned.

Meanwhile, family elders of both the accused and the complainant pleaded with the court to allow them to settle the matter out of court.