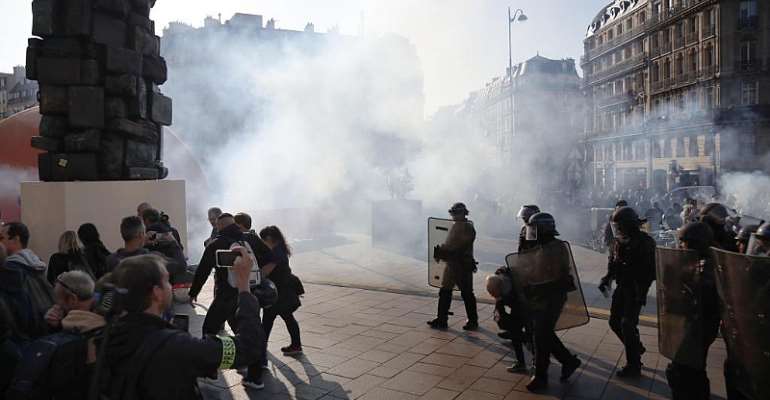 French police fired tear gas and arrested several people on Saturday as thousands of Yellow Vest anti-government protesters returned to the streets of Paris, showering the security forces with a hail of projectiles.

Demonstrators shouted slogans denouncing the police, President Emmanuel Macron and his pension reforms that have triggered the longest French transport strike in decades.

This was the latest of the weekly demonstrations held every Saturday by the Yellow Vest movement since November 2018, and which have recently been boosted by opposition to the pension reforms.

Authorities said 15 people were arrested after police tried to disperse a bloc at the head of the protest in northern Paris.

"The street is ours," some protesters chanted. "Macron, we're going to come for you, in your home."

Police fired tear gas as they came under a hail of projectiles.

"We're suffocating with this government which wants to put us on our knees," Moukam said.

"It's out of the question that Macron touches our pensions. We have worked all our lives to be able to leave with a dignified retirement," she said. "It's exactly that that he is challenging."

The rallies came on the 45th day of a strike that has hit train and metro traffic and caused misery for millions of commuters in Paris especially.

Trains are becoming more frequent however, and Paris's metro drivers voted to suspend their action from Monday, their union Unsa announced earlier on Saturday.