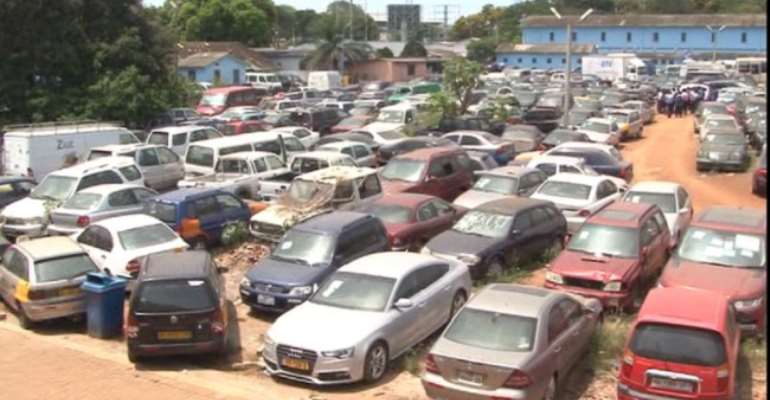 A group calling itself Coalition Against Galamsey Journalism have expressed disgust about an investigation conducted by Joy News indicating that the Director of Political Affairs at the Office of the Chief of Staff, Mr. Frank Asiedu Bekoe, has caused financial loss to the state through the cheap auctioning of confiscated cars.

According to the Joy News report, Mr. Asiedu Bekoe wrote to the Ghana Revenue Authority (GRA) requesting for the allocation of some confiscated vehicles to some selected individuals in 2017, when he was Head of the Confiscated Asset Committee.

The report also accused him of using the letterhead of the Office of the President to request for the confiscated vehicles at reduced prices for politically-connected beneficiaries.

Speaking exclusively to tishdaily.com, the group expressed surprise at assertions by the Joy News reporter that Mr. Asiedu Bekoe declined to comment on the subject after he was contacted.

According to the group, the Director of Political Affiars is a very honest man and will never compromise his credibility or principles for anything.

They explained that Mr. Asiedu Bekoe requested the journalist to put his request into writing so he could respond to the issues thoroughly and appropriately but the journalist did not do so and therefore it is false to say that he (Mr Asiedu Bekoe) declined to comment on the issue as the Joy News report indicated.

The group also refuted claims that the vehicles were auctioned to politically-connected individuals, insisting that was also false.

They indicated that Mr. Asiedu Bekoe only recommended Ghanaians from different ethnic, religious and political backgrounds to be considered for the auctioned vehicles, adding that the final decision was in the hands of the Customs Division of the GRA.

They explained that it is absolutely a normal practice for institutions/persons to send proposals to the Customs Division of GRA to be “CONSIDERED” during allocation and as such Mr. Asiedu Bekoe only recommended people for consideration by the committee as he normally does for those who consult him with their problems.

“It is instructive to note that the said letter was only a recommendation, the outcome of which was to be solely determined by the Commissioner General of GRA,” they reiterated.

The group therefore, stated: “Joy FM should be educated that an application for consideration CANNOT and SHOULD NOT be misconstrued to be a letter of allocation.”

The group stated emphatically that Mr. Bekoe’s office had nothing to do with the pricing of the cars, indicating that it was the responsibility of the Customs Division of the GRA, hence the issue of giving cars away cheaply was untenable or unacceptable.

They explained that Mr. Asiedu Bekoe did not at any point bring pressure to bear on or influence officers involved in making the final decision to auction vehicles.

The group said it was the reason only a few requests made by him were considered and that out of those considered, some of the beneficiaries turned down the offer because the vehicles were unserviceable.

In other instances, the group also noted, some of the allocated vehicles could not be located as they had been given to their original owners/importers the first offer.

“This explains why one Alex Gyedu who was proposed for consideration for a Hyundai Sonata but eventually the vehicle was allocated to and paid for by Nana Kwame Agyare.

Joy news must inculcate modern and clean journalism to redeem them from their already sinking image”, they said .