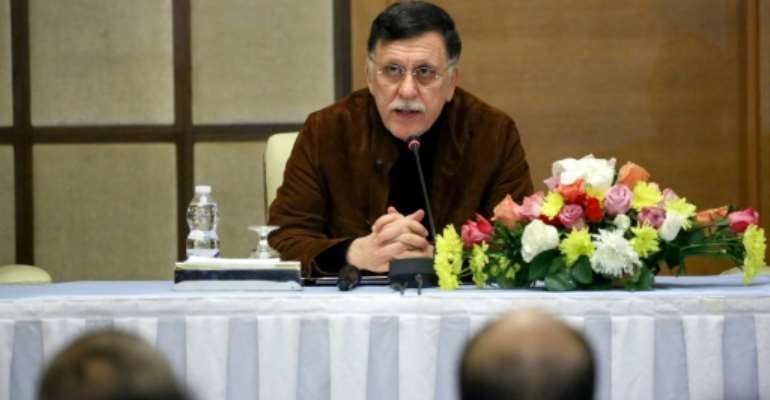 Fayez al-Sarraj, head of Libya's Government of National Accord, will participate in a peace conference on Libya in Berlin, but his rival Khalifa Haftar has not confirmed his attendance. By Mahmud TURKIA (AFP)

The head of Libya's UN-recognised Government of National Accord, Fayez al-Sarraj, announced Thursday he would attend an international conference on Libya in Germany, his press office said.

"We are going to be present in Berlin," where the conference is due to be held Sunday, Sarraj said during a meeting with GNA and military leaders in Tripoli, his office said.

His rival, eastern-based strongman Khalifa Haftar, has not yet confirmed his participation. German Foreign Minister Heiko Maas arrived in Benghazi on Thursday on a mission to persuade him.

According to the United Nations, the Berlin conference aims to end foreign interference and international division over Libya.

In his report to the UN Security Council on Wednesday, UN Secretary-General Antonio Guterres called for firm support for the peace conference and asked the warring parties to stop fighting.

While the GNA signed a ceasefire agreement orchestrated by Russia and Turkey in Moscow Monday, Haftar walked away from those talks.

Sarraj said in a statement Thursday that he had signed the agreement as he saw it as a "first step towards resolving the crisis and achieving peace and stability".

The GNA leader said Haftar "has chosen not to sign the agreement and asked for a delay", which Sarraj saw as "an attempt to undermine the Berlin conference before it starts".

Neighbouring Tunisia expressed disappointment on Thursday at not having been invited to the forthcoming conference.

Tunisia's ambassador to Germany conveyed his consternation in an interview with Deutsche Welle, his sentiments confirmed by Tunisia's foreign ministry, which would not comment further.

Tunisia shares a 450 kilometre (280 mile) border with Libya and is preparing to host thousands of refugees if Libya's conflict intensifies.

But after entering into force Sunday, Libya's ceasefire has mostly held, despite mutual accusations of violations from the two rival camps.

Pro-Haftar forces have been fighting since last April to seize the capital Tripoli from the GNA.

Turkey has deployed military forces to support the GNA against Haftar, who is backed by Egypt, the United Arab Emirates and Saudi Arabia, rivals of Ankara which have not sent troops to Libya.

Despite its denials, Russia is suspected of supporting Haftar with weapons, money and mercenaries.