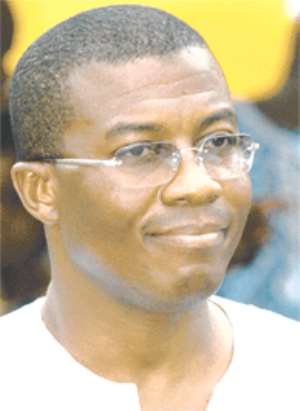 Botwe tells rumour mongers to "come forward" The Minister of Information, Dan Botwe has challenged detractors who fabricate stories to tarnish the image of the government and public officials to come out and substantiate their claims.

Mr. Dan Botwe was speaking yesterday as a guest at a press conference organized by the Deputy Minister of Trade and Industries Mr. Kofi Osei Ameyaw to respond to some media allegations into his business dealings.

He noted that it is often the practice of the National Democratic Congress (NDC) to make wild allegations against the government but unfortunately the allegations remain unsubstantiated.

"When they hold rallies or congress, they say all sorts of things about the government and ministers. Much as I urge the opposition National Democratic Congress and its cohorts to criticize the government as part of their constitutional duty, I urge them to do it with decorum", he said.

He called on the opposition NDC to offer constructive criticism that will engender national development rather than resorting to peddling falsehoods that will not help the country in anyway.

He advised media houses that have become the mouthpieces of certain political parties to act professionally.

"If we in the NPP see anything we think brings our image into disrepute or cast a slur on our reputation, we will resort to court" he said.

The Deputy Minister of Trade and Industry, Mr. Kofi Osei Ameyaw organized the press conference to deny media reports suggesting that he has been dealing in narcotic drugs and been convicted for other offences by a tribunal in Australia.

A newspaper report attributed to one Mrs. Elizabeth Agyepong alleged that the Minister, through a company known as Pointer Limited, has been exporting cocaine under the guise of soy beans. Mrs. Agyepong, who claimed being used by the Minister as a courier in his cocaine business, further alleged that Mr. Ameyaw took her to a shrine in the Ashanti Region for her tooth to be extracted for spiritual fortification. The publication said the woman claimed she saw, at the shrine, two dead bodies including that of a pregnant woman.

Mr. Ameyaw told journalists that the allegations were not only false but also absurd. He said the allegations have been recently invented by Mrs. Agyepong to malign and punish him for not acceding to several attempts she had made to blackmail him.

The Minister told journalists that never in his life has he ever seen cocaine, let alone handle it and challenged Mrs. Agyepong to come out and substantiate the allegations. "I have never in my life purchased or sold cocaine or any narcotic drug and I therefore challenge Mrs. Agyepong to come out of her hiding and assist the police where, when and from whom she purchases the cocaine to supply to me or Pointer Limited", he said.

On what he knows about the company Pointer Ltd, Mr. Ameyaw said the company is a limited liability company which was incorporated to deal in pharmaceuticals, building construction and estate development, export and import of general merchandise among others. He said the company was registered and operated by Mr. Herman Seshie, his uncle, since 1973 "when I was barely 13 years old".

Mr. Ameyaw stated that he had been resident in Australia for a continuous period of 24 years until the year 2003 when he returned to Ghana. He noted that at the time of his return, Pointer Limited was engaged in the purchase of soy beans from the Northern Region for export to Europe. He said even though the company at that time had obtained orders of a substantial value, it had neither the cash nor the credit worthiness to raise the necessary funds to purchase the beans to honour the orders.

Mr. Ameyaw disclosed that his Uncle's property which he had used as security for loans to Pointer Limited were under the threat of foreclosure by the banks. He said he was then called in by the uncle to help in revamping the company and to salvage the imminent loss of all that he had to toil for over the years.

The Minister noted that he was inclined to help Mr. Seshie not just because he was his uncle but rather "an uncle who had supported my education and upbringing". He said the proposal offered him shareholding in the company and an opportunity to make a reasonable return on the investment if he could find money to finance the operations of the company. "This was the beginning of my formal involvement with Pointer Limited, to which I assumed the role of Managing Director", Mr. Ameyaw told newsmen.

The Minister said it was in furtherance of the role he assumed as MD of Pointer Limited that he had to visit Tamale in December 2003 and January 2004 to familiarize with and oversee the purchasing operations of the company.

As to how he came into contact with Mrs. Agyepong, Mr. Ameyaw said it was during his second visit to Tamale that he met her as one of the several persons who engage in the purchase of soy beans from the hinterlands to supply the company.

Mr. Ameyaw concluded that he dealt with Mrs. Agyepong from January to April 2004 and had not seen her since until recently when he met her at the offices of Mr. Kwesi Pratt, Managing Editor of the Insight newspaper, where she began to make the allegations.

Mr. Ameyaw, accompanied by his lawyer Mr. Yoni Kulendi, is contemplating taking legal action against the newspapers that have teamed up with Mrs. Agyepong in maligning him. "Since my entry into Ghanaian politics, I have enjoyed the full cooperation of the media and have always been a firm advocate of press freedom. However the type of free expression I believe in is a responsible use of that freedom, but unfortunately on this occasion, some of my friends in the media have crossed the line and in the process done my image and reputation an irreparable damage", he noted.

The Minister said he is left with no option but take recourse to the law, "a process I have painfully and reluctantly began".