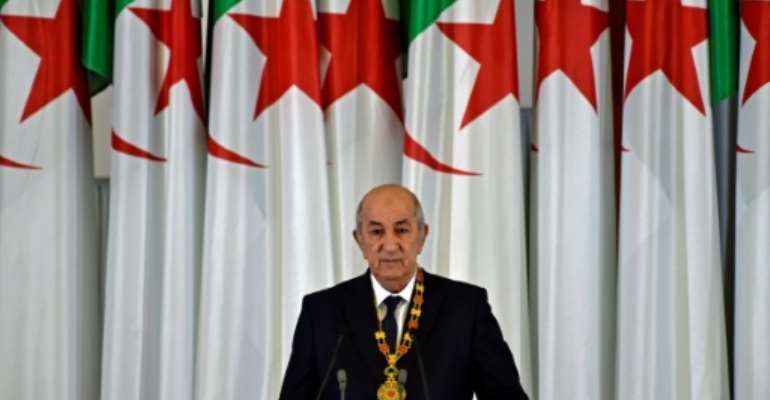 Algerian President Abdelmadjid Tebboune gives an address during the formal swearing-in ceremony in the capital Algiers on December 19, 2019. By RYAD KRAMDI (AFP/File)

The president of protest-hit Algeria, Abdelmadjid Tebboune, plans to outlaw "hate speech" that has proliferated on social networks in recent months, his office said Monday.

Tebboune asked Prime Minister Abdelaziz Djerad to draft a bill "criminalising all forms of racism ... and hate speech in the country," according to a statement published by the official APS press agency.

The new initiative follows "an upsurge in hate speech and incitement," the presidential statement said.

Algerian social networks have become a battleground for rival political camps after they gave rise to the popular "Hirak" protest movement that in April ended the 20-year reign of president Abdelaziz Bouteflika.

The tone became more aggressive in the run-up to a December 12 presidential election, held in the face of strong opposition from the protest movement which saw the polls as an attempt by the establishment to consolidate its power.

All five candidates who ran in the poll had links to Bouteflika, with Tebboune having served as one of his prime ministers. Official turnout was less than 40 percent.

The law would allow authorities "to confront those who exploit the freedom and peaceful nature of Hirak" by brandishing "slogans that undermine national cohesion," the statement said.

The initiative has sparked fierce debate on social media between those who back it and those who see it as an unneccessary measure, with some wary that it could give wide scope to crack down on legitimate protest.

The planned law stipulates that "everyone is called upon to comply with the Constitution and laws of the Republic, in particular respect for... the Nation state and its values... as well as the symbols of the state."

Nearly a year after the launch of the popular movement, its activists continue to demand an end to the governing system in place since the country's independence from France in 1962.