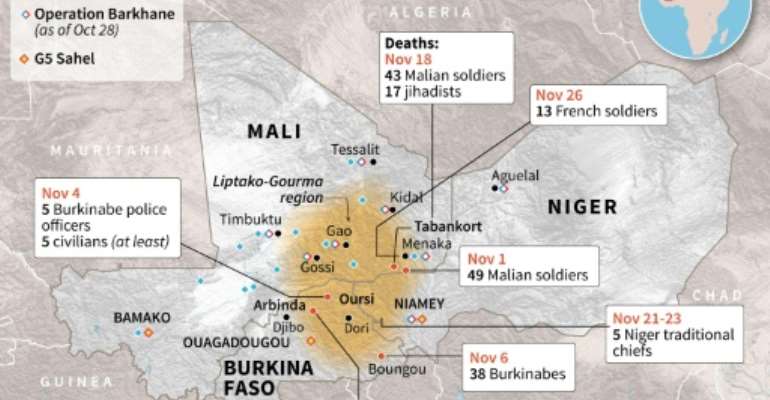 Attacks in the Sahel. By Laurence SAUBADU (AFP)

The forces of the G5 Sahel, whose leaders meet in Pau in southwestern France on Monday, have come increasingly under attack from jihadists they have been sent to fight.

Here are the main attacks over the past year:

- On January 9 this year, 89 soldiers are killed in an attack on a military camp at Chinegodar, in the western region of Tillaberi, near the border with Mali. During the attack 77 "terrorists" are "neutralised" according to Niger's authorities. It is the worst jihadist attack in Niger's history.

- On December 10, 2019, in the same region, 71 soldiers are killed in an attack claimed by the Islamic State group, which sees hundreds of jihadists attacked a camp near the border with Mali.

- On May 14, 28 soldiers are killed near Tillaberi in Niger's same border region with Mali and Burkina Faso after an ambush. The Islamic State claims responsibility.

- On November 18, 2019, 43 Malian soldiers are killed when their patrol is attacked at Tabankort, in the northeastern region of Menaka, as they were carrying out a joint operation with Niger forces.

- On November 1, in a jihadist raid on a military base at Indelim, in the eastern Menaka region near the border with Niger, gunmen shoot dead 49 Malian troops. The attack is claimed by Islamic State-allied militants.

- On September 30, 40 soldiers are killed at Mondoro and Boulkessy in central Mali at two military camps near the border with Burkina Faso. A Sahel-based Al-Qaeda-linked group, GSIM, claims responsibility.

- On March 17, 26 are killed in a military camp at Dioura in central Mali, in an attack also claimed by GSIM.

- On December 24, 2019, an attack on the military base and northern city of Arbinda by some 200 heavily armed jihadists leaves seven soldiers dead along with 35 civilians. It is the worst jihadist attack in the country for five years.

- On August 19, 2019, 24 soldiers die during a "major attack" on a military base at Koutougou in northern Burkina Faso, near the border with Mali. It is the deadliest strike against the Burkinabe military.

- On March 22, 2019, 23 Chadian soldiers are killed in southwestern Chad when they come under attack from Boko Haram jihadists on their position at Dangdala. It is one of the most deadly attacks suffered by the Chadian army since the beginning of the anti-Islamist fight.