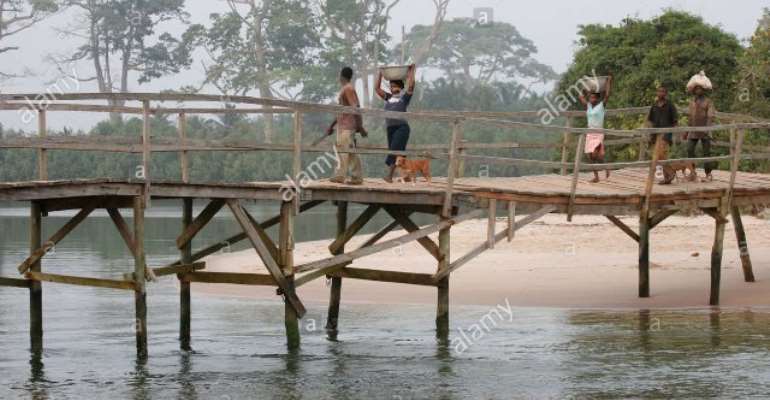 Individuals living in the coastal town of Butre in the Western Region are demanding on government to fix the main bridge which links the community.

The almost eighty-meter wooden footbridge which was constructed 10 years ago now looks weak and dangerous.

Butre, a community which doubles as a tourist site, has seen the bridge becoming a bane to the progress of it as several tourists are scared to use the bridge.

Residents, including children, are scared to use the bridge but have no option as it is the only route to other communities and their beaches.

“We are frightened whenever we use the bridge because my colleague lost his life last year and I am pleading with the government to fix the bridge for us.” Elizabeth, a class six pupil told JoyNews.

According to elders in the community, three people have lost their lives on the bridge and about a dozen of them injured.

The community’s spokesperson spoke to JoyNews, “about four people have lost their lives and several others have sustained various injuries all before my eyesight.”

Peter, a tour guide lamented how the state of the bridge is affecting revenue and “the tourists are all scared because of the bridge and it is really affecting me because in 2018 I used to embark on 20 canoe trips but in 2019, I really struggled for more trips.”

Tourist sites are paying the hard price as they could not cash in during the Year of Return due to bad roads and the bridge.

Francis, a manager of one of the resorts in the community stated, “the bridge has been nicknamed the dancing bridge because the bridge shakes whenever they use it, so people are scared to use it and one other factor is the poor nature of the road, which is why a lot of tourists have not visited.”

Some tourists who spoke to JoyNews reporter, Henry Kwesi Badu said “we came across the bridge last midnight and we found it precarious but I think it’s worse using it during the day because you get to see how fragile and wobbly it is.” Another lamented: “I was so scared, I even had my menses even though it wasn’t my time yet.”

Butre is a small fishing village located on a sheltered bay near a forest between the communities of Busua and Asemkaw, about 20 kilometres southwest of Takoradi. Now home to nearly 400 inhabitants, largely from the Ahanta ethnic group, Butre was among the early historical towns generated by 17th-century inter-European and inter-African conflict.