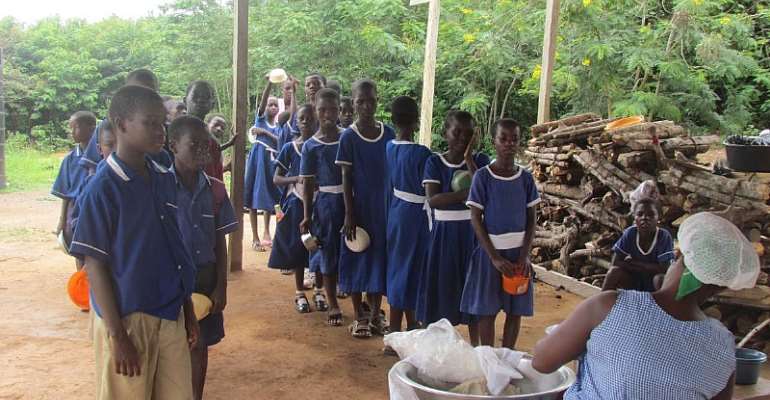 The Ghana School Feeding Program Secretariat has rebuked the school feeding caterers who picketed at the Nima residence of President Akufo-Addo on Wednesday.

Some angry caterers of the school feeding program last night besieged the home of the president to demand payment for work done for the past year.

The caterers say all efforts to get the school feeding secretariat to pay their monies have failed.

But speaking to Citi News, Public Relations Officer for the Ghana School Feeding program, Siba Alfa said the action of the caterers were uncalled for because 90 percent of caterers have been paid.

“We are all partners so if they have issues we believe they should come to us first for us to go through their issues and then be able to resolve it. But if they don't come how will we even in the first place know that this is their problem or this is what is going on? So we are urging them that they should come to us so that we can look at their issue and resolve it because the money is there but we are dealing with taxpayers money so we can't pay just like. Before any payment is done, we have to make sure that the money is going to the right person and the person really has worked for that money.”

Scores of aggrieved caterers who cook under the Ghana School Feeding Programme in Accra on Wednesday besieged the Nima residence of President Nana Akufo-Addo.

The women threatened to hold naked demonstration if their monies are not paid in full by the Akufo-Addo government.

Some of the caterers said they have not been paid for over a year now.

They said all efforts to get the Ministry of Gender and Social Protection to pay them their arrears have proven futile.

Others also claimed that banks are on their necks for the monies they borrowed to pre-finance their services, adding that they can no longer withstand the pressure.

They added that the only option left to them was to spend the night in front of President Akufo-Addo's house to press home their demands.

After some agitations and complaints from the caterers the Ministry for Gender, Children and Social Protection released some GH¢150 million to defray the government's debt owed to them in July 2019.