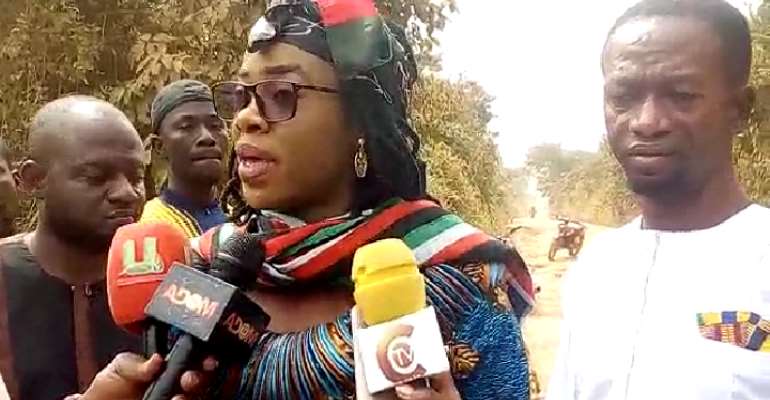 The NDC Parliamentary Candidate for Sunyani West, Hon. Millicent Yeboah Amankwah as part of her social responsibility to the people of Sunyani West Constituency, has embarked on reshaping of the Nsuatre- Kwabena Kuma cocoa road.

The roads within this densely populated community have been in a very deplorable state since 2016.

The 14km Nsuatre- Kwabena Kuma cocoa road is the main root that links the people of Nsuatre to Wamfie in the Dormaa East District in the Bono Region.

Kwabena Kuma is a farming community under Nsuatre traditional area with about 90% of the residents being farmers but due to the bad nature of the road, the farmers find it very difficult to convey their farm produce from the farms to the various market places resulting in the huge loss of produce after they are harvested.

After paying a courtesy call on Nananom at the Palace, the Chiefs, the Elders, the Parliamentary candidate Hon. Millicent Yeboah Amankwah together with the NDC Executives and the people moved to the starting point of the 14km road where the Chief of Twumasi krom poured libation for the official commencement of the reshaping of the road.

A tricycle loaded with goods had an accident on the road as at the time of filing this story; a routine incident that the farmers have to battle with on a daily basis.

The Parliamentary Candidate, Hon Millicent Yeboah Amankwah, in an interview with the media disclosed that humans are needed in all aspects of our lives hence the need to help reduce the hardship of the farmers and those who use the Kwabena Kuma cocoa road.

She said the reshaping of the road will go a long way to help farmers and drivers in the area.

According to her, when NDC was in government, they used to reshape the road regularly but for the past 3 years, the NPP government has done nothing about the road hence the need to embark on this project.

She added that all the major developmental projects in the Sunyani West Municipal were done by the NDC government and promises more of such projects when the NDC party comes back into power after 2020.

Nana Amoah Appiah, the Nifahene and also the Acting President of the Nsuatre Traditional Council commended Hon. Millicent Yeboah Amankwah for the great initiative to salvage the community from this challenge.

He continued that the main objective of Nananom is development and that they are ready to partner or support anyone who is willing to champion the development of the area.

Nana Amoah Appiah on behalf of Nananom urged Hon Millicent Yeboah Amankwah to remain focused on her work and called for God’s blessings upon her.

Some of the farmers and road users couldn't hide their joy. They expressed their gratefulness for this great initiative by the Parliamentary Candidate hoping that the deplorable road which was a nightmare to them was going to be end.