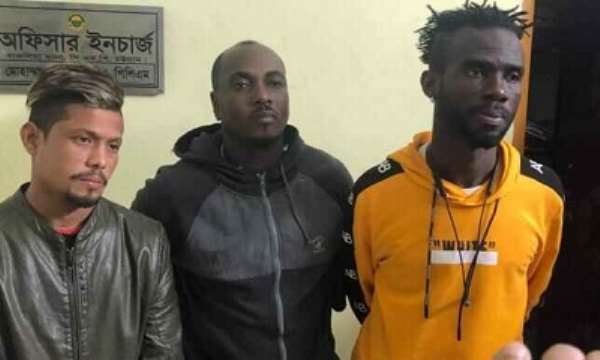 Twum, 27, and Appiae, 28, were arrested with 7,500 pieces of Yaba tablets, which contain a mixture of methamphetamine and caffeine which is illegal in many South-East Asian countries.

According to a report by UNB , the two Ghanaian citizens got down from a bus in Shah Amanat Bridge area around 2am while going to Dhaka from Cox’s Bazar.

Following their suspicious movement, police challenged them and recovered the Yaba pills from their possession after a search, he said, adding that law enforcers later detained them.

During interrogation, the duo revealed that they were smuggling the drugs for one Mohammad Masud in the capital.

Following the information, police arrested Masud from Bashundhara Residential Area in the capital in the afternoon, he said.

Citing the Ghanaian nationals, the Officer in Charge of Bakalia Police Station Mohammad Nezam Uddin said they are footballers and play in different football leagues in Bangladesh.