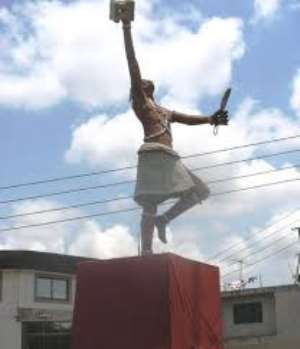 Kookrokoo!! Asanteman, you have been asleep for the past 27 years. It is daybreak, so you must wake up! For the past 27 years , Asanteman has been voting en masse for New Patriotic Party {NPP} but has not benefited from its loyalty. Nana Addo Dankwa Akufo-Addo's Government has taken Asanteman for granted.

Our Elders say, "Se wo a nkasa wo tri ho a wo yi wo ayi bone." To wit " if you do not direct the barber, he would end up giving you a bad haircut."Our great grandparents developed the "Asante Jungle Warfare Tactics", that was the reason why they were able to build a vast empire. "The Kingdom continued to expand under King Osei Bonsu (1801 - 1824). Asante territory covered nearly all of present day Ghana, according to documents at "Library, Documentation And Information Department Of The African Studies Centre of The Netherlands".

Now the mechanisms and dynamics have changed and Asanteman must adopt a new approach to ensure that it gets its fair share of development projects from the Government. Fortunately, Asanteman has the clout to demand its fair share of development projects if it played its cards well. It has more that two million voters and must use this asset to get what it wants. This Writer is of the strongest view that Asanteman must stop voting for NPP enmasse.

Asanteman must embark on "Operation Florida" - which enables Florida to determine, who wins the Presidency in the USA. For example, Asanteman must decide to vote for National Democratic Congress (NDC) in the 2020 Election and demand that the NDC Government should make Accra to Kumasi Highway a dual carriage else they will vote out the Party in 2024. The practice of sending the same set of people to Parliament is not beneficial and must stop.

About The Writer:
Boakye-Dankwa Boadi was the Supervising Chief Editor and Acting General Manager of Ghana News Agency when he retired in 2011. He has written many articles. You may google "gna boakye-dankwa boadi" and access them.