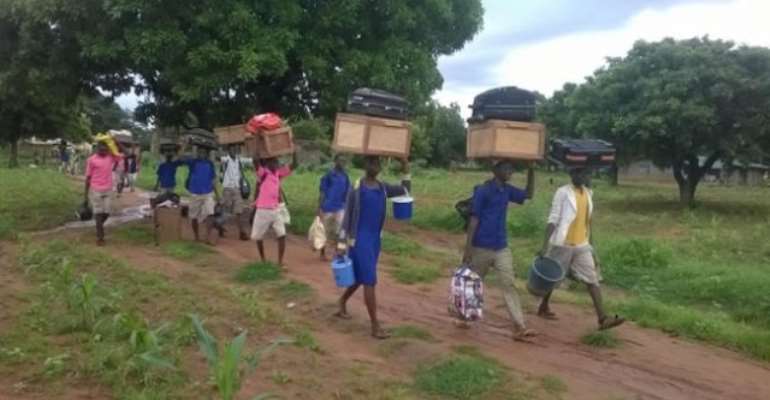 According to the Former Deputy Minister of Education, there seems to be no credible and reliable enrollment data on the actual beneficiaries of the FREE SHS.

Okudzeto Ablakwa, according to a statement released by his office, said, "the considerable angst and frustration by large sections of Ghanaians over the Double Track Academic Calendar, I am afraid, would only go from bad to worse if the Akufo-Addo administration does not resolve what I call the Free SHS Enrolment Data Mess.”

Read the full statement released on Friday, January 3, 2020, below.

The considerable angst and frustration by large sections of Ghanaians over the Double Track Academic Calendar, I am afraid, would only go from bad to worse if the Akufo-Addo administration does not resolve what I call the Free SHS Enrolment Data Mess.

It is trite knowledge in public policy formulation that the accuracy of your data determines the success of your policy intervention.

It is deeply troubling and terribly tragic that as a country, we appear not to have credible and reliable enrolment data on the actual beneficiaries of the Government's flagship Free SHS programme.

In total bewilderment, the same 2018 Budget document at Paragraph 799 contradicts the earlier figure of 353,053 and reports that the SHS beneficiaries are 396,951. A significant variance of 43,898.

Even more confusing, the 2019 Budget document introduces a fourth conflicting 2017 enrolment figure of 361,771. This can be found at Paragraph 824.

This bizarre trend continues for the 2018/19 academic year as well.

Instructively and yet comically, the 2019 Mid Year Budget Statement introduces a fifth conflicting enrolment figure for the 2017 cohort as 362,108 at Paragraph 241.

Government’s 2020 Budget document further compounds the chaos by stating at Paragraph 242 that total beneficiaries of the first two cohorts leads us to a figure of 794,899. Considering the preponderance of conflicting data, one is at a loss how the Finance Minister came to this latest summation. Even more worrying is the projection of 1,264,000 for all three cohorts which Government makes at this same Paragraph in issue.

It is crucial to point out that none of the multiple conflicting figures contained in the 2018, 2019 and 2020 Budget Statements together with the 2018 and 2019 Mid Year Reviews align with EMIS Data.

The Education Management Information System (EMIS) Data is an independent comprehensive data source on Ghana's education sector since 1988. EMIS was relaunched in 1997 with funding from the World Bank and the Government of Ghana. Technical support for EMIS is provided by the UNESCO Institute for Statistics (UIS) and Harvard University. EMIS data is published annually and available to the general public.

The other important observation to be made from the EMIS Data is that recent claims by Vice President Dr. Bawumia that Free SHS has seen an increase in enrolment by 69% is a blatant untruth.

It is fair to admit that EMIS points to an increase in the GER from 52.7% under the NDC to 62.6% under the NPP. Though this increment is below the NDC’s record, what must strike us, however, is that despite all the exaggerated claims about the impact of Free SHS, almost 38% of our 15 to 17-year-olds who should be in Secondary School are not in school. Curiously, EMIS Data confirms that the situation is worse in the Greater Accra Region where our national capital records a GER of only 37.1%. This must be of concern to us all.

Admittedly, instead of the propaganda overdrive on Free SHS, we should be recognizing that cost is not the only barrier and that more work ought to be done beyond the current Free SHS model to attract and retain our teenagers in secondary school, particularly, in the national capital.

With all the chaos over unreliable data from Government official documents, it is not surprising to see how turbulent the second cycle landscape has become.

We should also recognize that the mess with conflicting data flying all over the place can serve as an avenue for massive corruption. I humbly invite the Auditor General to look into this in his next report.

I wish to urge Government officials to cut down on the chest-thumping and propaganda overdrive. That should give way to rigorous and accurate data collection for effective policy planning.

The lives of thousands of young Ghanaians and the future of our country is at stake. We cannot afford to sacrifice all that on the altar of unscientific chest-thumping.

As I have indicated elsewhere, Double Track is the lazy man’s option. If the Mills/Mahama era could avoid Double Track when faced with higher numbers (184,204) during the 2010/11 academic year due to President Kufuor’s 4-year extension policy; a feat achieved largely due to political will to get priorities right, then President Akufo-Addo has no excuse.

Drastically cutting down profligate expenditure such as the GHS62.5 million spent on presidential travels in 9 months and saving this country some GHS444 million on a needless voters register can certainly free resources to implement the much needed Mills/Mahama 2009-style rapid SHS infrastructure expansion to end this nightmare called Double Track.

Fortunately for Ghana, President Mahama is returning in January 2021, God willing, with a superior track record that guarantees an end to the dreaded Double Track.