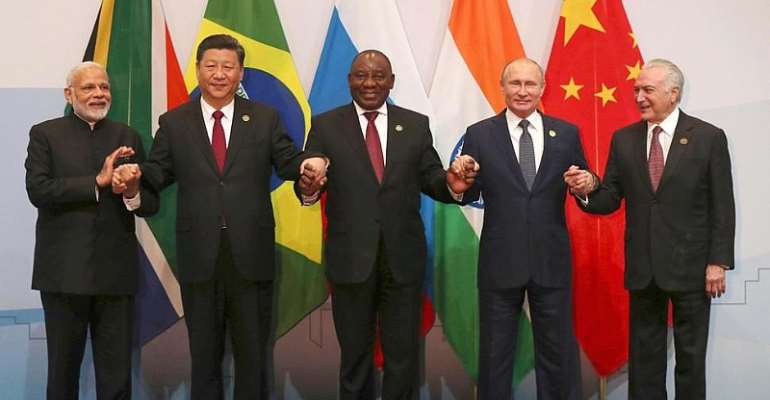 President of Russia Vladimir Putin extended his greetings on Christmas and the New Year 2020 to heads of foreign states and governments, as well as leaders of international organisations including BRICS.

In his message to President of Brazil, Jair Bolsonaro, Putin emphasised that Brazil's 2019 BRICS Presidency fully confirmed the country's constructive and interesting approach to cooperation within this association.

He noted that the Russian side, taking over the leadership of the Five, intends to work effectively for the sake of enhancing the BRICS authority and promoting common approaches to pressing problems on the international agenda. Putin further expressed hope for the continuation of substantive and productive dialogue.

In his messages of greetings addressed to Indian President, Ram Nath Kovind, and Prime Minister, Narendra Modi, the President of Russia highlighted the high level of bilateral relations. He emphasised that the agreements reached during the talks in Vladivostok would pave the way for building up mutually beneficial cooperation in many areas, and for the coordination of efforts in resolving current issues on the regional and international agenda.

Putin recalled that 2020 would mark the 20th anniversary of the signing of the Declaration on Strategic Partnership between Russia and India, expressing confidence that this important anniversary would be marked by new achievements in the development of bilateral cooperation.

In his message of greeting to President of the People's Republic of China, Xi Jinping, on the occasion of the New Year and the upcoming Spring Festival, Putin assertively noted that much has been done lately to strengthen the Russian-Chinese comprehensive partnership and strategic interaction. That the agreements reached during last year’s meetings opened up new prospects for mutually beneficial cooperation in various areas.

In particular, the Russian leader pointed out that supplies of Russian gas to China via the eastern route was launched, and that the successful Region-to-Region Cooperation Years made it possible to expand mutually beneficial ties on the local level.

The President noted that Russia attaches great importance to implementing the next major bilateral project, which is the Years of Russian-Chinese Scientific, Technical and Innovative Cooperation, and expressed his belief that joint efforts will help build up relations between Russia and China and expand their constructive interaction in international affairs.

Putin expressed the conviction that implementation of the existing agreements would further enhance Russian-South African comprehensive strategic partnership and coordination within the UN, the G20, BRICS and other multilateral forums.

As stipulated by the guidelines, Russia will assume the rotating presidency of the BRICS (Brazil, Russia, India, China and South Africa) regional association on January 1, 2020. It takes over from Brazil that headed the group in 2019.

The BRICS member countries (Brazil, Russia, India, China and South Africa) collectively represent about 26% of the world’s geographic area and are home to 3.6 billion people, about 42% of the world’s population. The five commands a combined nominal GDP of US$16.6 trillion. By Kester Kenn Klomegah, frequently writes on Russia, Africa and the BRICS.

Highlights Of 2020 SONA [Infographics]
2 minutes ago

Akufo-Addo Is Becoming A 'Modern-Day Nebuchadnezzar’ – Sam G...
2 minutes ago