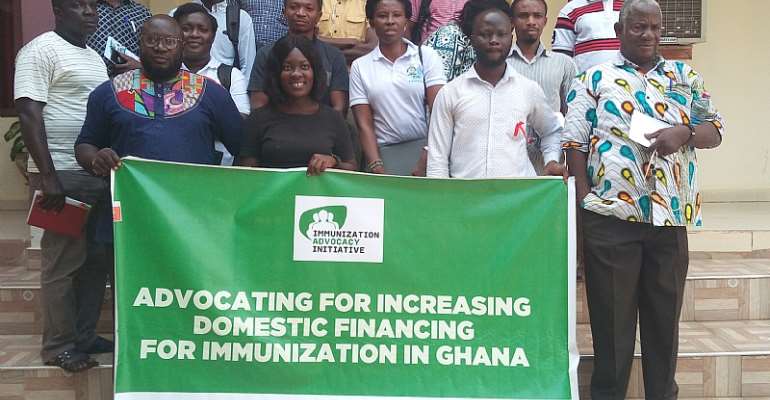 The West African AIDS Foundation (WAF), an NGO dedicated to the fight against the spread of the HIV virus, has organized a Roundtable discussion in Sunyani, capital of the Bono region, on “Immunization Financing in Ghana.”

It was primarily aimed at increasing domestic financing of health budget with prioritization for immunization activities.

In a Presentation during the discussion, the Regional Co-ordinator of WAF, Edward Ayabillah, noted that even though the cost of immunization in Ghana keeps raising, there is no corresponding increase in government’s co-financing commitment to the same course.

Mr. Ayabillah expressed the hope that the government of Ghana will make adequate and sustainable budgetary provisions toward immunization drives and ensure that the proportion of the budget allocation to immunization increases year on year by government.

According to him, vaccination is one of the greatest public health achievements of human history as it has led to the eradication of smallpox, near eradication of poliomyelitis and elimination of measles in several regions.

“Globally an estimated two to three million deaths among children under five years are prevented annually through immunization. Currently ten vaccines are given against 14 diseases in the country”, the Regional Co-ordinator of WAF said.

He expressed worry about the absence of a structured training for the newly employed Expanded Programme on Immunization (EPI) service providers, “therefore senior colleagues give them on-the job training to perform their duties which is not enough.”

A Deputy Director of Public Health at the Ghana Health Service, Dr. John Ekow Otoo added his voice on the need for government to seriously invest in immunization activities to consolidate the gains being made in that area.

“Government should prioritize vaccination programmes and this is not negotiable”, Dr. Ekow Otoo stated, adding that a robust health delivery system is a prerequisite for an effective vaccination drive.

He said infrastructure for effective vaccination activities must be put in place from the national level to the local level while effective and constant training must be given to health workers who are involved in immunization exercises, especially those connected to the “cold chain.”

He also bemoaned the poor sanitary conditions of most parts of the country and called for attitudinal change, especially by Ghanaians, in order to make Ghana clean.

Most of the participants underscored the need for government to strengthen the Ghana Health Service and other relevant stakeholders to up their game in the area of vaccination.

The West Africa AIDS Foundation has been in existence since 1999 and currently operates in six regions with satellite offices in four other regions. Among the districts which it has been working are Asougyaman and Yilo Krobo in the Eastern region, Asante Akim South and Sekyere Central in the Ashanti region, Ho Municipal and North Dayi in the Volta region as well as Asutifi North in the Ahafo region and Sunyani Municipal in the Bono region.

Its vision is to be a key player of the global effort to develop and support individuals, communities and nation while its mission is to help battle the spread of HIV and AIDS, TB as well as other diseases and mitigate their effects on communities by providing care and support to promote healthier individuals and for a better future.