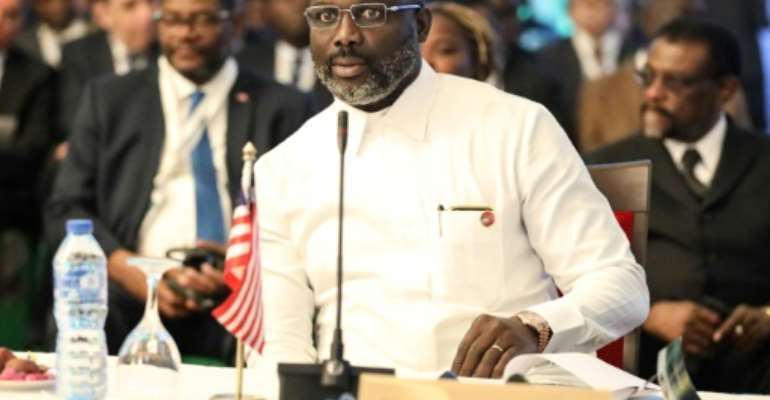 Liberian President George Weah is under growing pressure from the opposition over his handling of the country's economic crisis. By Kola SULAIMON (AFP)

The United Nations and other West African countries urged Liberia on Friday to avoid a major protest rally planned for next week as the impoverished country grapples with a deep economic crisis.

The Economic Community of West African States (ECOWAS) and the UN's office in West Africa and the Sahel (UNOWAS) sent a joint mission to Liberia this week to talk with President George Weah, who is under growing pressure over his handling of the crisis.

Opponents have called for an anti-government protest in the capital Monrovia on Monday.

But ECOWAS and UNOWAS issued a joint statement exhorting "all parties to work towards calling off this imminent protest in the general interest of Liberia and the sub-region."

After meeting the footballer-turned-president Weah and other ministers, the delegation said it "welcomes the general desire to call off the protest of December 30 if specific actions were taken in addressing some of the governance and economic issues which form the basis of the current tension in the country."

Tensions have risen in recent weeks in the run-up to the protest, with the government accusing the opposition of calling for the "unconstitutional eviction" of Weah, who took office in January 2018.

The opposition, for its part, sees "nothing wrong" in calling for Weah's resignation and has maintained its call for the rally to go ahead.

In their joint statement, ECOWAS and UNOWAS said they "acknowledge that the incumbent president is democratically elected and has a legitimate mandate of six years."

While they recognised citizens' right of assembly, they "reminded all stakeholders of their responsibility to maintain peace, security and stability of Liberia... and cautioned against any form of violence".

Still traumatised by back-to-back civil wars and the 2014-2016 Ebola crisis, Liberia is struggling to revive its flailing economy.

Inflation is rampant, according to the World Bank, and civil servants regularly go unpaid.