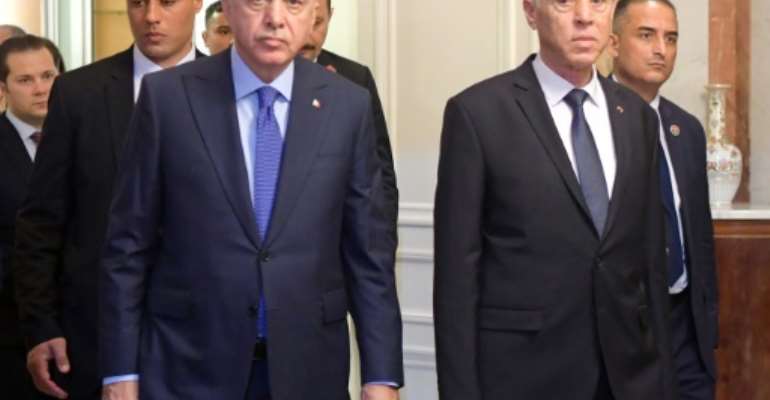 Turkish President Recep Tayyip Erdogan met his counterpart in Tunisia on Wednesday to discuss the conflict in neighbouring Libya, whose UN-recognised unity government has signed a military deal with Ankara.

"We discussed ways to cooperate to reach a cease-fire in Libya and restart the political process," Erdogan said in a press conference after meeting former law professor Qais Saied, who took up office as president in October.

The Turkish parliament on Saturday ratified a security and military cooperation deal that was signed with the Tripoli-based Government of National Accord (GNA) last month.

Erdogan has vowed to increase military support to the GNA if needed as it battles eastern Libya strongman Khalifa Haftar's months-long offensive to seize the capital.

"The impact of the negative developments in Libya is not limited to that country but also affects neighbouring countries, Tunisia first and foremost," Erdogan said during his brief visit.

"There must be a ceasefire in Libya as soon as possible."

Tunisia shares a long border with Libya and thousands of Libyans have sought refuge on Tunisian soil since the 2011 NATO-backed uprising which toppled the regime of longtime dictator Moamer Kadhafi.

While Turkey and Qatar back the GNA, Haftar has received support from neighbouring Egypt, the United Arab Emirates and Russia -- all of whom have tense relations with Turkey.

Moscow last month denied reports in the New York Times that it had sent had mercenaries to fight on Haftar's side, while the UN has also accused the strongman's forces of recruiting fighters from Sudan.

"I wonder what they're doing in Libya?" Erdogan said.

"If Turkey is invited (to send troops), we will accept, because at least we have an agreement" with the GNA, he added.

Ankara has received international criticism for its deal with the GNA and a separate maritime jurisdiction agreement, also signed in November.

Part of the deal sets a maritime boundary between the two countries which Greece says does not take into account the island of Crete, at a time when several regional players hope to exploit Mediterranean gas reserves.

Witness confirms Dampare’s involvement in the arrest of Abua...
58 minutes ago