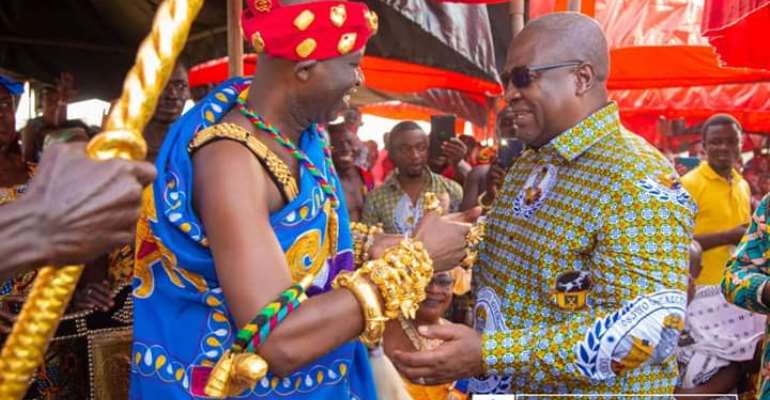 Former President John Mahama has showered praises on the Paramount Chief of Dormaa in the Bono Region, Osagyefo Agyeman Badu II, for spearheading development in his traditional area.

Mr. Mahama was one of several high profile personalities from all walks of life who attended the grand durbar of the 2019 edition of the Kwafie festival and 20th anniversary celebration of the enstoolment of Osagyefo Oseadeeyo Agyemang-Badu II, and Odeneho Akosua Fima II, the paramount chief and Queen of the Dormaa Traditional Area.

The celebration came off on Saturday December 21, 2019, in Dormaa, Bono Region.

In a statement on the colorful celebration, Mr. Mahama said "I commended Osagyefo Agyeman Badu II, not only for continuing the legacies of his predecessor to bring peace and development to Dormaa but also, for his contributions towards development of the Bono region as a whole."

According to him, "in addition, I acknowledged the role of our traditional leaders and the impact they can have on the development of their chiefdoms.

"Nana Dormaahene has been a friend and adviser to all our Presidents since the days of President Jerry Rawlings. I benefited from his wise counsel as well," he added.