No more US sniffer dogs to Egypt, Jordan after deaths 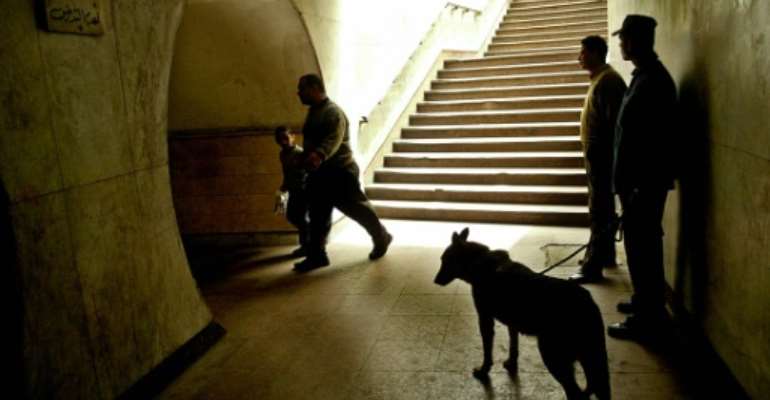 Egyptian policemen are pictured working with an explosive sniffer dog in 2005. By (AFP/File)

The United States has temporarily stopped sending bomb detecting sniffer dogs to Jordan and Egypt after several of the animals died due to what US officials say was lack of care.

"Any death of a canine in the field is an extremely sad event and we will take every measure possible to prevent this from happening in the future," a US State Department official told reporters on Monday.

The dogs "play a critical role in our CT (counter-terrorism) efforts overseas and in saving American lives," the spokesperson said.

The State Department's own independent Office of Inspector General (OIG) began looking into the well-being of the animals after reports of canine mistreatment surfaced in mid-2017.

In a report out in September, the inspectors discovered numerous cases of negligence in the care of some 135 dogs, including Belgian Malinois, German Shepherds, Labradors, and other dogs trained in detecting explosives.

These US-trained animals were provided to fewer than a dozen countries as part of a counterterrorism cooperation program.

The main concerns were with Jordan, the first beneficiary of the program, where one dog died due to inadequate care and another had to be euthanized upon its return to the United States.

The OIG investigators recommended that the US government stop supplying Jordan with sniffer dogs -- but the State Department's Bureau of Diplomatic Security, which sends sniffer dogs abroad, refused to comply.

In a new report out in December the OIG discovered that in June and September two other dogs had died in Jordan of "unnatural causes" -- one due to heat stroke and the other poisoned by pesticides sprayed by Jordanian police in or near the dog's kennel.

The deaths could have been avoided with better care, the report said.

Furthermore, three of the 10 dogs supplied to Egypt in 2019 also died prematurely -- one from lung cancer, the second from gallbladder disease, and the third from heat stroke, an especially terrible death due to negligence and improper care, according to a veterinarian cited in the document.

The investigators renewed their earlier recommendation to stop sending dogs to Jordan, and now added Egypt to the black list.

This time the State Department complied.

"We concur with the OIG recommendations to cease temporarily providing additional canines to Jordan and Egypt until those countries implement our requirements to ensure the canines' health and welfare," the State Department official said.

The December report also urged US officials to seek ways to better monitor the sniffer dogs. In Egypt, for example, US officials have been denied access to the kennels or the airport where the animals are deployed.