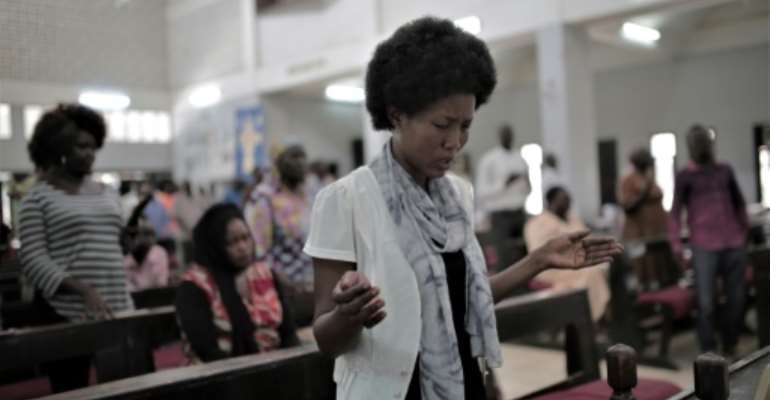 A Sudanese Christian woman prays during a Sunday service at the All Saints Cathedral in Khartoum in August 2019 amid rising hopes for religious freedom in Sudan. By Jean Marc MOJON (AFP/File)

The United States on Friday lifted fast-changing Sudan from a blacklist for religious freedom violations as it issued warnings to Nigeria, Cuba and Nicaragua.

Sudan was the only nation removed from the State Department's annual list of "countries of particular concern," which are subject to sanctions if they do not better protect religious liberty.

But Hamdok's government is still waiting for a bigger prize from the United States -- removal from a list of state sponsors of terrorism, a designation that has severely impeded investment.

Nine countries remained on the blacklist including Pakistan, which was designated in 2018 after years of US hesitation over concerns on the treatment of minorities including through abuse of a blasphemy law, which can carry the death penalty.

Also on the list was China, which according to rights groups and US officials, has incarcerated at least one million Uighurs and other Muslims, and US ally Saudi Arabia, which imposes the rigid Wahabi school of Islam.

The other countries on the list were Eritrea, Iran, Myanmar, North Korea, Tajikistan and Turkmenistan.

"No country, entity or individual should be able to persecute people of faith without accountability," Secretary of State Mike Pompeo said in a statement.

"We have acted, and we will continue to do so," he said, calling religious freedom a priority for President Donald Trump's administration.

The State Department added Cuba, Nicaragua and Nigeria to a watchlist of countries that could face a full designation if they do not improve their records.

In Nigeria, the State Department said in its latest report on religious freedom that minorities have reported discrimination including limits on free expression and in obtaining government employment.

A soldier walk past Muslims as they pray near a gas station in Nigeria's Ogun State in August 2019. By PIUS UTOMI EKPEI (AFP/File)

The State Department pointed to the lack of accountability in violent crackdowns on the Islamic Movement in Nigeria, a pro-Iran Shiite group, and the arrest of a Christian man for attempting to covert a Muslim girl.

The State Department said that religious groups faced restrictions and harassment in both Cuba and Nicaragua, leftist-led nations that have come under growing pressure from Trump.

The latest designations notably did not target India despite mounting concern from US lawmakers over Prime Minister Narendra Modi's Hindu nationalist agenda, including a citizenship law that has prompted widespread protests over charges it marginalizes Muslims.