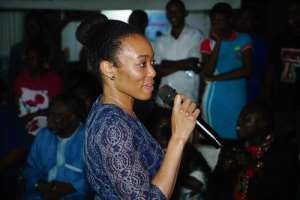 Members of the National Democratic Congress (NDC) in the Korley Klottey Constituency have reaffirmed their support for Dr Zanetor Agyemang-Rawlings, the Member of Parliament (MP) for the area to retain the seat in 2020.

At an engagement with some of the constituents in Osu, near the Castle Junction last Thursday, the NDC Constituency Chairman for the area, Mr Benjamin Kotei Kotey, cautioned the electorate not to deny themselves the opportunity of electing the one who would represent their interests and ensure their needs were met.

“Zanetor is capable of leading the party to victory in the constituency come the 2020 general election,” he stated.

Propaganda
The NDC National Organiser, Mr Joshua Akamba, appealed to the electorate not to be deceived by the propaganda surrounding the performance of former President John Dramani Mahama.

He said Mr Mahama performed better and must be given another opportunity.

The NDC MP for Odododiodioo, Mr Nii Lante Vanderpuye, said Ghanaians were looking up to the NDC to work hard to win the elections.

Social amenities
For her part, Dr Agyeman-Rawlings, said she would create awareness and consciousness among the electorate, especially the youth, on the need to concentrate on issues that would move Korley Klottey forward.

She said the provision of social services had been her focus for the past three years in office and to improve the lives of the citizens.

She reiterated her preparedness to continue to work with the people in the constituency to ensure it remained one of the largest support bases of the NDC.

The constituency treasurer, Mr Justice Amalai Tetteh, called on the youth to bury all differences and vote wisely for Zanetor.

“You should also be vigilant at all polling stations and block all forms of loopholes,” he admonished the youth.

NDC Run To UN To Revoke Akufo-Addo's SDGs Advocate Role Over...
11 hours ago