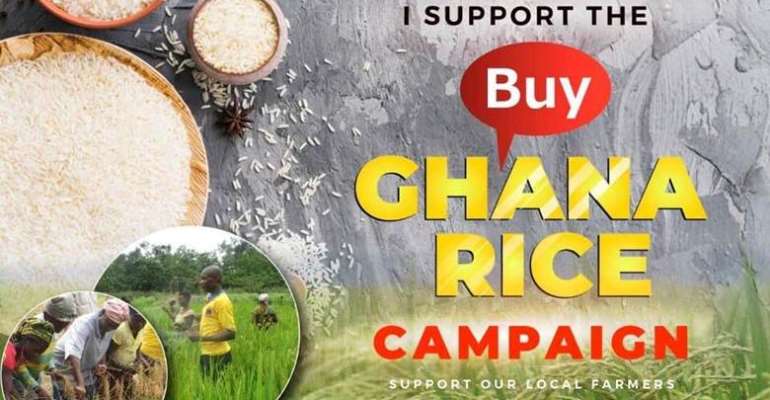 Ghana is currently promoting local rice consumption by kind courtesy of Citi FM strong advocacy. What do we really know based on scientific studies on rice? The truth is that, there are more than 40,000 types of rice, including white, brown, black and wild varieties. Each has its own nutritional profile, benefits and points that invite discussion relating to how they’re grown, processed, and prepared.

Wild rice is perhaps one of the good options. It’s more nutrient-concentrated, has fewer calories and carbohydrates than white rice, and may aid in promoting satiety and weight loss

Rice, in one form or another, is one of the most important staple foods in the world and has been for possibly thousands of years. According to the Cornel Research, rice supplies around 20 percent of the world's food energy, with the Asia-Pacific region producing and consuming 90 percent of the rice on the planet according to M.k. papademetrio study titled ‘rice production in the Asia-pacific region: issues and perspectives’

Basmati rice from India, jasmine from Thailand and Arborio from Italy are growing in popularity among the more than 40,000 types, including long-, medium- and short-grain white, as well as brown, yellow, purple, red, black and other shades in between, each with subtle textures and flavor variations according to a 2017 article by Juliette Steen titled The Difference Between White, Brown And Red Rice’ and another by the Rice Association’

These aromatic varieties can cost twice as much as plain white rice according to one report titled Survey of Recent Innovations in Aromatic Rice,” 2012 . Eating rice may be good for your health according Medical News Today 2017, but there are better varieties. Technically, that's true, but if you want to ensure that your chosen rice is good for you, check how it's grown. It's extremely important to keep abreast of new information and know the path foods have taken on the way to your table.

The answer is not always according to Annie Price 2017. She argued that Refined carbohydrates like white rice are basically fake foods and do nothing to promote the health of your body. ‘So is white rice good for you? No, it’s stripped of its nutrients, leaving pretty much nothing but carbohydrates that enter the bloodstream like an injection of sugar’.

In a 2012 article by Jessie Szalay - Live Science Contributor ,Brown rice has a large amount of plant lignans, which help form plant cell walls. These lignans are also believed to protect humans against various diseases, including heart disease

Brown rice is also loaded with Magnesium. This mineral is absolutely vital to heart health, and magnesium deficiency can be dangerous depending on the degree. As we do know, magnesium helps maintain normal heart rhythm, and scientific studies show that heart health in both men and women is significantly improved with an increased dietary intake of magnesium. Studies also reveal that getting magnesium from our diet rather than supplements is likely preferable, especially for people who have already suffered heart attacks in the past according to University of Maryland.

In generality, both animal and human studies have demonstrated that brown rice can reduce cardiovascular risk factors and has cardio-protective effects, Kazemzadeh et al 2014 titled ‘Effect of Brown Rice Consumption on Inflammatory Marker and Cardiovascular Risk Factors among Overweight and Obese Non-menopausal Female Adults’ published in International Journal of Preventive Medicine and Kim et al 2006 titled ‘The effects of a mixture of brown and black rice on lipid profiles and antioxidant status in rats’ published in the journal Annals of Nutrition Metabolism.. Brown rice is also high in selenium , another major heart-boosting nutrient.

One significant attributes of brown rice nutrition is its tremendously high manganese content per serving. A cup of cooked brown rice fulfills almost all of our daily manganese needs at 88 percent. Manganese has been neglected in health promotion, but it’s tremendously important to optimal health.

A significant trace mineral needed for many vital functions, including nutrient absorption, production of digestive enzymes , bone development, formation of blood-clotting factors and immune system defenses. Avoiding enough manganese in diet, can put you at risk for a lot of unwanted health problems, including weakness, infertility, bone malformation and seizures. This nutrient found abundantly in brown rice also helps the body regulate blood sugar , absorb calcium properly and metabolize carbohydrates. In a nutshell having manganese in brown rice actually helps to metabolize it better according to University of Maryland

Whole grain foods like brown rice contain both fiber and bran. This is why brown rice offers so many more health benefits than white rice -it still has its bran content.

Scientific research has shown that opting for brown rice instead of white rice may actually decrease your risk of developing diabetes. Refined carbs like white rice are not a friend of diabetics (or of anyone really) because they raise blood sugar so quickly and easily.

A 2010 study out of Harvard School of Public Health revealed that if you consume a little over two servings of white rice (about 12 ounces) per week, making the switch to brown rice could decrease type 2 diabetes risk by an estimated 16 percent. This makes sense since white rice has a significantly higher glycemic index compared to brown rice. The researchers also pointed out that brown rice eaters tended to be healthier overall, eating more whole grains in general and exercising more frequently. Brown rice lovers were also less likely to smoke cigarettes or have diabetes running in their families according to Denise Mann 2010 article published by CNN.

This not to say that white rice causes diabetes, but brown rice definitely appears to lower the risk of developing diabetes, thus making it a better choice for anyone following a diabetic diet plan .

Brown rice is often a go-to carb for many gluten-free eaters. Similar to oatmeal , brown rice is a naturally gluten-free food as long as it’s not contaminated by gluten -containing substances according to Gluten free living website. Many people who avoid gluten in their diets can easily fall short on fiber and the beneficial B vitamins found in whole grains. The good news here is that brown rice provides lots of fiber and B vitamins minus the gluten.

What Is Brown Rice?

Rice is an edible, starchy cereal grain that’s naturally gluten-free. The scientific name for rice is Oryza sativa. Brown rice nutrition facts are quite impressive and definitely beat white rice nutrition any day. During harvesting, rice kernels are enclosed in their outmost layer known as the hull or husk. Brown rice only has the hull of the rice kernel removed so it maintains the grand majority of its inherent nutritional value. When brown rice is further processed to remove the bran as well, then it becomes white rice and loses most of its nutrients as a result of this processing.

Rice Cultivation is said to have begun about 6,000 years ago in China, while archeologists have found rice seeds about 9,000 years old. Rice has its longest history in Asia where it still continues to be a staple to this day according to The World’s Healthiest food website. Fast-forward to modern times, rice has become most sought after around the world and has a place in such a large variety of foods from Asian to Mexican to Indian, and many more.

According to Self-Nutrition data, A cup (8 ounces) of cooked brown rice contains about:

Comparison of the different types of Rice:

All rice is naturally gluten-free, but brown and black rice, as well as wild and red rice, are also considered to be whole grains. These whole-grain rices are naturally high in B vitamins and other nutrients. White rice, however, has to have B vitamins added into it in order to provide any white rice nutrition according to Think Rice.com.

Before one starts cooking brown rice, be sure to rinse it and remove any debris. It is also highly advisable to soak and sprout your before cooking it, which has been found to decreases allergens and phytic acid content while increasing the absorption of nutrients. Soak brown rice for about 12 hours and let it sprout for no more than one to two days.

Brown rice generally needs more cooking time than white rice. It’s best to cook brown rice like pasta. Instead of following cooking instructions on rice packages, cook it by adding much more water. Scientists proved this method could reduce arsenic levels, especially inorganic arsenic, in rice by up to 40 percent. It could, however, also lower levels of some rice nutrients too according to Raab et al 2009. Researchers from the U.K. found that cooking rice in a coffee pot reduced arsenic by up to 85 percent( Emily Sohn 2005)

According to WebMed.com, Brown rice is considered safe for the majority of people in normal food amounts. It is advisable not to go overboard in your brown rice consumption because arsenic in rice is a valid concern. Unfortunately, the Food and Agriculture Organization of the United Nations warns that, “Rice in particular can take up more arsenic than other foods and due to its high consumption can contribute significantly to arsenic exposure.”

A Consumer Reports study revealed that there were measurable amounts of arsenic in virtually every one of the 60 varieties of rice it tested. It also found that rice cereal and rice pasta can have much more inorganic arsenic so it’s important to limit rice product intake in children, especially since rice cereals are commonly fed to young children.

Since rice is one of the most popular gluten-free alternatives on the market today, this finding is definitely concerning. notwithstanding, Consumer Reports advises shoppers to choose brown rice from California, India or Pakistan because brown rice from these areas tends to have about a third less inorganic arsenic than other brown rices. However, it is best to choose locally produce rice in Ghana.

The Food and Drug Administration has yet to set set a federal limit for arsenic in rice and rice products. According to the FDA, buying organic brown rice doesn’t equate to lower arsenic levels since arsenic is absorbed by plants regardless of growing methods. It is adviseable to opt for organic brown rice if possible or procure local rice.

It is also possible to have a brown rice allergy. If you have any food allergy symptoms after consuming brown rice, discontinue consumption