Ghanaian Stranded In Caribbean For 32 Years 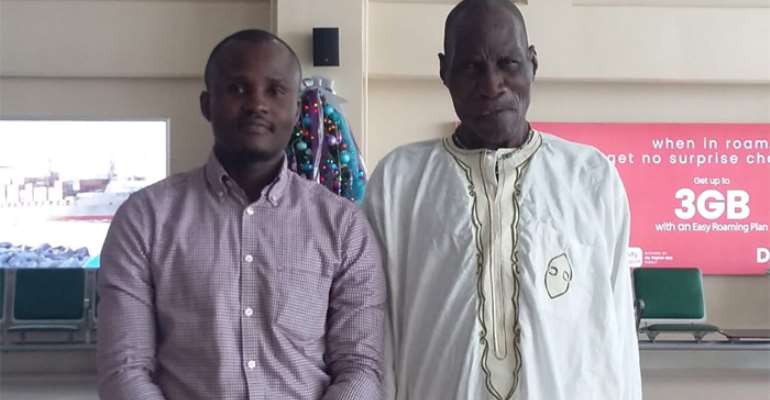 Hassan Kennedy in jalaba and the deputy head of mission Havana

The Ghanaian envoy to Cuba Napoleon Abdulai and the mission are keeping a certain Hassan Kennedy who hails from Pig Farm, Accra and has been stranded in the Caribbean for the past 30years.

After engaging in menial jobs in Mauritania his first port of call for two years, he and three other Ghanaians stowed away in a Caribbean-bound ship.

The captain of the ship was said to have left them in Saint Vincent and the Grenadines (SVG) after disagreements over their pay.

One of them, DAILY GUIDE learnt from Abdulai, got married on the 32 island nation and two managed to get to the USA following support from family members. Kennedy aka Hassan Ali Hassan was left behind doing all manner of jobs to fend for himself.

After losing his job two decades ago, he developed a mental challenge and was admitted to Mental Health and Rehabilitation Centre in Glen SVG where he was treated.

A Good Samaritan Ayyub Abdullah from the Island of Grenada befriended Hassan and provided him with support. Nicknamed 'African' by Vincentians, Hassan endured unspeakable hardship as he had no travel documents and money to purchase tickets. He speaks Ga, Twi and Hausa.

The Ghanaian mission only got to learn about him from the Searchlight newspaper of SVG story on him in June, this year.

“After establishing the fact that he is Ghanaian, the mission issued a Traveler's Certificate (TC) to Kennedy and brought him to Havana for onward return to Accra. A serious challenge arose as TCs were not recognized by immigration officers in Trinidad and Tobago,” the envoy told DAILY GUIDE.

A series of diplomatic interventions, formal and informal finally got the National Security Minister of Trinidad and Tobago and Foreign Minister to on humanitarian grounds allow Kennedy to pass through their country under the escort of Fred Dankwah, Consular Officer to the envoy.

They flew from SVG through Port of Spain in Trinidad and Tobago and Panama City to Havana on Sunday night, December 14, to Cuba, DAILY GUIDE has learnt.

From Havana, Kennedy will be accompanied to Accra through Istanbul by Alhassan Yakubu, Deputy Head of Mission.

Hassan's plight according to Ghana's High Commissioner to SVG, highlights the need to raise awareness on seeking greener pastures without documents such as passports. “Every Ghanaian needs to have the National ID to facilitate support from the 55 diplomatic missions Ghana has. Every week one or two Ghanaians land in Havana with the intention of swimming the 90 nautical miles to Florida. This is propagated by unscrupulous travel agents who lied to the young men who spent a few thousand dollars buying tickets of Turkish airline. They are stranded and sent home immediately by Cuban Immigration authorities,” he said.

The High Commissioner has appealed to people not to buy the misinformation and lies of travel agents. You can't get to the US from Cuba by swimming he said.

Hassan Kennedy spent two years in Mauritania and 34 in SVG.

He is expected to be handed over on Thursday, at the Ministry Of Foreign Affairs, before noon.