Rule of Law Is A Slogan? 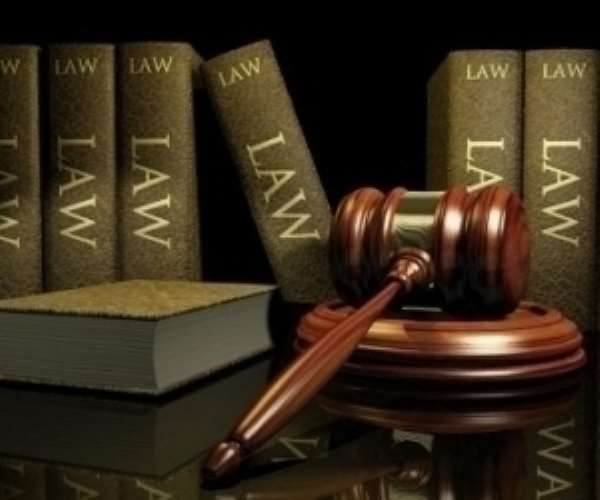 In a world that the law has jaundiced eyes,

the term equality before the law is nothing but a fleeting illusion. That law invariably favours the wealthy or the influential and not the 'Aplanke' or the commoner.

It reminds me of George Orwell's best-selling book---Animal Farm, written in 1945.

Indeed, some animals, he says are more important than others. And that's relatable to our world. After all, who born dog.

If liberty and equality as is thought by some, are chiefly to be found in democracy, they will be best attained when all persons alike share in government to the utmost--- Aristotle.

My dear readers, may I crave your indulgence to congratulate three Ghanaian distinguished female justices--Mariama, Avril and Gertrude.

They were honourably honoured by President Akufo-Addo yesterday.

They're seasoned and learned. And I know they're well aware of what awaits them. Nonetheless, I will like to share with them an anecdotal story in this write-up. It's about the rot in our society, which seems to have no cure. But do they have the right remedy?

Justice and her sister Fairness have ill-treated many over the years. It's an undeniable fact.

And they're still doing it. The likes of 'Aplanke' or the commoner have often been given blank cheques as though they are not citizens of this land.

Justice in particular, has systematically denied 'Aplanke' his fundamental human right, his economic right, his social right and his political right. More often than not the commoner has faced systematic discrimination such as race, tribe, class, colour, status, gender, education and many more.

Once upon a time, luck evaded Aplanke as he was made to face the full rigours of the law.

What did he do? He got caught for stealing one of the bleating animals. Actually, he stole a he-goat. He hid the animal in his room. But the four-legged kept bleating-- blowing the cover off the commoner.

Unfortunately, he was hurriedly arraigned before court. And as expected Justice had no mercy for the piss poor pot.

At a breakneck speed, Justice held her garvel high like a sword. And she garveled!.

She's found Aplanke guilty and sentenced him to prison for five years with hard labour.

In sharp contrast, Justice was lenient to the wealthy. She let go the man that had been cited for causing financial loss to the state.

A few weeks ago, the state's newspaper-- 'Pashew' carried a screaming headline: " Minister in charge of Ocean Embezzles $25million".And after week of 'toobay-toobay' all is gone dead!

This is what makes Justice bias, unfair and discriminatory in Ghana and Africa as a whole.

In Africa, when the wealthy create and loot, empty the state kitty or falls into trouble, he has the powerful chiefs, the clergy and the Imams to run to. The phrase 'Fama Nyame' is evoked from the high horses. Soon the case that looked like the dragon's horn, becomes a damp squib.

Yes, in our world we reward the wealthy for stealing big bucks and punish the commoner for stealing a rabbit or a chicken feed.

The big or the clever thief goes unpunished. Ironically, he's cleverly moved around. Call it 'shifting cultivation'.You move the shamed corrupt official to another office to perpetuate the loot.

How ridiculous is that!

On Tuesday 17, 2019 President Akufo-Addo, tasked Justices of the Supreme Court to ensure the strict application of the laws of the land, and do so without fear or favour, affection or ill-will.

“When anyone falls foul of the law, the society expects that the person will be dealt with accordingly, and the law enforcement agencies must ensure this is done. That is the true meaning of the concept of equality before the law. The Judiciary plays a central role in law enforcement, with the Supreme Court as the apex Court.”

President Akufo-Addo made the statement when he swore into office Justices Mariama Owusu, Avril Lovelace-Johnson and Gertrude Araba Esaaba Torkornoo.

The three female Justices have been appointed to fill three vacancies on the Court as a result of the retirement of two Justices, namely, Justice Vida Akoto-Bamfo, Justice Sophia Adinyira, and the impending retirement, in three (3) days’ time on 20th December, of Chief Justice Sophia Akuffo.

While congratulating the justices, he underscored that they're deemed to have the independence of spirit, proven integrity, high moral character, and impartiality of mind to hold that high office.

With the Constitution of the 4th Republic that as decreed that the Judiciary has jurisdiction in all matters of the breach of the law, civil and criminal, including matters relating to the interpretation and enforcement of the Constitution, the President indicated that the Court also has onerous responsibilities to protect the individual liberties and fundamental human rights of citizens.

The President is seen not to have minced words on matters that relate to judgments.

“The situation, where judges proffer judgements on the basis of decisions from lower courts and cite them as law, is not acceptable, and even less so when judges cite no authority at all for their rulings and give orders without reasons. Judges, more so Justices of the Supreme Court, must be learned, know their case law and ensure their decisions and judgements are properly motivated.”

Mr Akufo-Addo, therefore challenges the new Justices of the Supreme Court to help “build a new Ghanaian civilisation, where the rule of law is not a slogan, but an operating principle for the development of our State, so that the dreams of prosperity that animated the great patriots, who founded our nation, can find expression in our generation.”

So with that challenge thrown out to the newly-sworn-in justices, I will leave you all with this: Anything we say, anything we preach and anything we think we can do, let's do it for the good of humanity.