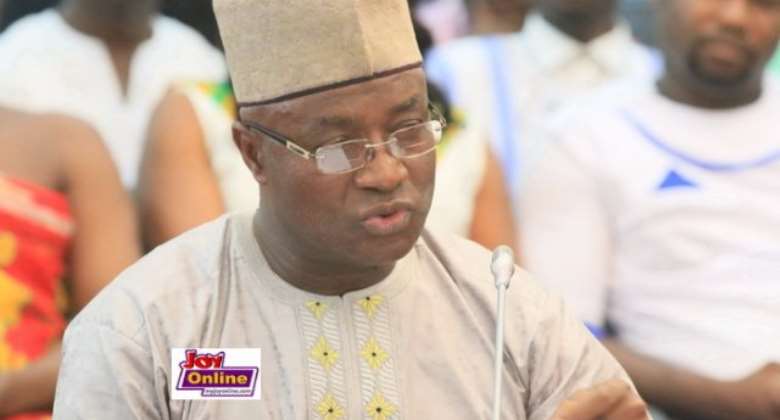 Majority Leader and Minister of Parliamentary Affairs Osei Kyei-Mensah-Bonsu has asked the Auditor General to make its reports to the House to exercise effectively its power over the purse.

“You submit your report to Parliament and Parliament must act on that,” the Majority Leader pointed out.

He said the Auditor General is a tool for Parliament in exercising its oversight responsibilities, and urged the outfit to make its findings and reports available to Parliament, before making them public.

He expressed reservations about instances when the report of the Auditor General was presented to Parliament, and it found out that the Auditor-General got it wrong and yet went out to make public, its findings.

“In many instances when the report has come to Parliament we find out that many times the Auditor-General has gotten it wrong and yet he has gone out there to scandalise and vilify personalities,” the Majority Leader said in Accra.

The conversation was on the theme: “Enhancing the visibility of Parliament: The Role of the Media.”

The Majority Leader said, “Increasingly, we are finding situations, where the Auditor-General after they finish with the work before they transmit it to Parliament, will organise press conferences and take some people to the cleaners.

“In an established democracy, the Auditor-General is a tool for Parliament in the performance of our oversight responsibilities.

“When Parliament has taken a decision on that, Parliament then rounds up civil society organisations and indeed media practitioners to enforce whatever they will uphold in the Auditor-General’s report,” the Leader added.

He was at a loss why Mr. Daniel Yao Domelevo, the Auditor General recommended Disallowance of the payment of the US$1million to Kroll and Associates, which the government, through the Ministry of Finance paid.

Mr Yaw Osafo-Maafo earlier in a letter addressed to the Auditor General dated October 8, 2019, sought to set the record straight on the matter, and also moved to challenge a $1million surcharge against him.

The Auditor-General concluded that Kroll and Associates was paid for no work done, following what he said was the persistent failure of the Senior Minister to provide proof of actual work done.

Government on September 26, 2017, signed a contract with Kroll Associates for some professional services.

The contract was signed on behalf of the government by Yaw Osafo Maafo, the Senior Minister, and was to take effect from February 2017.

Mr Kyei-Mensah-Bonsu decried the “naming and shaming” by the Auditor General, when later evidence proved allegations already made contrary, and expressed concern about Mr Domelevo’s style of operation, which he said “causes a bit of tension.”

Mr Yaw Boadu Ayeboafoh, the Chairman of the National Media Commission, said journalists are bound to err, but should reduce errors or limit them.

He underlined courage by journalists to use the power of the pen to nip looming national threats in the bud.

Prof Audrey Gadzekpo, a Communications Consultant and Dean of the Legon-based School of Communication Studies, said journalists should respect the dignity of institutions even as they criticize them.

“We must be critical, but how do we ensure that they do not become cynical,” the don asked.

She urged the public to also criticise the media, but observed that when the media is overly criticised, it gives a feeling that democracy does not work.

“Is your coverage fair, balanced, informative and educative enough?” she asked.

Reverend Ebenezer Ahumah Djietror, Head of the Table Office in the Parliament of Ghana, said Parliament could be considered a bastion of democracy, and urged the media to work at establishing mutual trust.

He said Parliament and the Media share common agenda of human development, and it was proper that Parliament leveraged on the Media, “so that everything covered at Parliament is geared towards the development of the individual.”

Nana Agyemang Birikorang, the Dean of the PPC, called for more of such conversation, with the hope that it would be a regular feature.