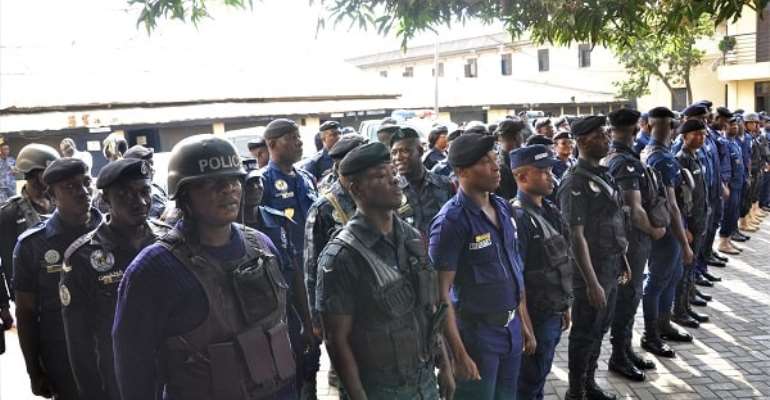 A joint security force made up of 48,000 officers and other ranks have been deployed for today’s district and unit committee elections across the country.

Additionally, 1,500 policemen have been deployed from Accra to support those in the six new regions and the Ashanti Region.

Besides, two security officers had been deployed in every polling station that is considered a flashpoint.

The inspector General of Police (IGP), Mr James Oppong-Boanuh, who disclosed this in an interview with the Daily Graphic in Accra yesterday, said the mobile and the rapid response teams of the Ghana Police Service were also on stand-by to intervene in any eventuality.

He warned troublemakers to stay away or have themselves to blame.

The IGP appealed to all voters to go to their polling stations to vote for their preferred candidates without any fear of intimation.

Greater Accra
On Monday, 3,000 members of the joint force who will operate in the Greater Accra Region were taken through a briefing session at the Accra Regional Police Command ahead of their deployment to the various polling stations.

The Head of Operations at the Accra Regional Police Command, Assistant Commissioner of Police (ACP) Mr Kwesi Ofori, said the officers and men were to create the desirable security for the Electoral Commission (EC) to conduct the elections in the region successfully.

He said they were also expected to safeguard ballot boxes and ensure law and order at the polling stations.

ACP Ofori reminded them that they were to act on the instructions of the returning officers at the polling stations, as far as security was concerned, and not to engage in any activity that would disturb the elections.

Security force ready
Later in an interview, ACP Ofori said the joint security force was poised to provide adequate security and ensure the success of the elections in the region.

He urged the public not to engage in activities that would mar the elections, saying: “People with no business with the elections should stay off the polling stations.”

To complement the work of the security force, he said, other specialised subcommittees had been created to focus on intelligence, with the aim to improve on police response to all electoral offences.

He said all district and divisional police commanders and other officers would visit polling stations in their jurisdictions to beef up operations.

Additionally, he said, the rapid response and the patrol teams would be stationed at strategic locations to ensure quick response to any security situation, while other policemen were on stand-by as a back-up measure.