Akufo-Addo Cuts Sod For Forward Operating Base In Ezilinbo 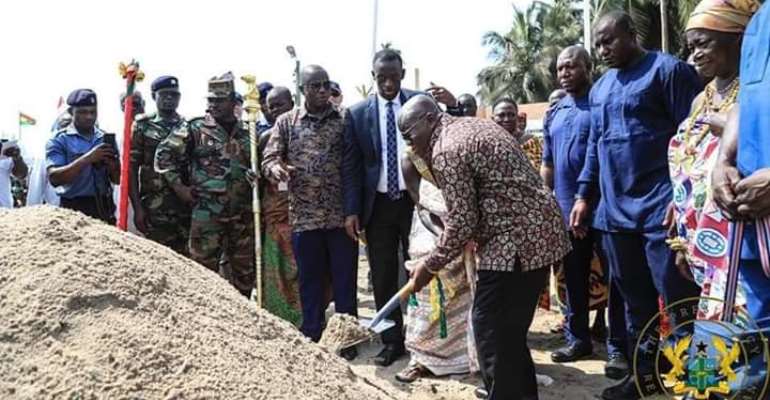 President Akufo-Addo cutting sod for commencement of the project

President Akufo-Addo, has cut the sod for the construction of a Forward Operating Base in Ezilinbo, in Jomoro, in the Western Region, to protect the country’s oil and gas infrastructure.

At the sod cutting ceremony on Monday, President Akufo-Addo revealed that the ceremony is in fulfilment of a pledge he made to the Ghana Armed Forces at this year’s WASSA in March.

According to the President, considering the enormous potentials of the oil and gas sector, and the need to confront the general maritime security challenges in the Gulf of Guinea, Government, through the Ministry of Defence, initiated plans for the establishment of Forward Operating Bases (FOBs) at selected locations along the country’s coast to augment existing naval port infrastructures.

“These locations include Keta in the Volta Region, Winneba and Elmina in the Central Region, and Ezinlibo in the Western Region. Today, I am delighted to be cutting the sod for the first of these bases here in Ezinlibo,” he said.

The infrastructure, whose construction is to be executed by Messrs Amandi and Vuluxx, will include a breakwater and a jetty with double lane tarred road, berthing facilities, and accommodation for one hundred and fifty (150) military personnel.

“As part of the project, Government has also contracted Hawkmoor Co. Ltd. to supply six (6) Phantom boats, and provide other equipment to enhance operational efficiency of the Base. When completed, the Base will serve as an advance military, operational location from where the security of our offshore oil fields, TEN, SANKOFA and JUBILEE, can be co-ordinated and maintained,” the President added.

Congratulating the Minister for Defence, Hon. Dominic Nitiwul, MP, for bringing this maritime security operational plan, which has been on the drawing board since Ghana commenced the exploration of oil and gas in commercial quantities, to reality, President Akufo-Addo stated that the benefits of the oil and gas industry to the nation’s economy and citizenry are evident for all to see.

The oil and gas sector, the President explained, has witnessed continuous growth, offering jobs and sustainable livelihoods for many Ghanaians.

With more offshore explorations and discoveries being made, and with the country’s daily production rate rising from eighty thousand (80,000) barrels to over two hundred thousand (200,000) barrels per day, this is expected to double to some four hundred (400,000) in the next four years.

“It is evident that huge capital investments in this nascent offshore oil and gas industry come with attendant security challenges, and should, thus, be jealously protected,” President Akufo-Addo added.

Currently, piracy and armed robbery in the Gulf of Guinea continue to pose significant threats to national and regional maritime activities, including the operations of the facilities of the offshore oil and gas sector.

“Aside these major threats, incidents of theft, including illegal oil bunkering, kidnapping at sea for ransom, illegal fishing, terrorism and drug trafficking, are common threats across our territorial waters. These transnational crimes do not only affect national and regional peace and stability, but also impose significant costs on our economy and those of our neighbours, he stated.

The President was grateful to Chiefs and people of Ezinlibo for giving their full support to the project, stressing that it holds good prospects for Ezinlibo and surrounding communities, and the oil and gas industry

“I expect the project to be completed on time, and I urge the contractors and the consultant to ensure the construction is done in accordance with the designs of the project. The Ministry of Defence, the Ghana Armed Forces, and all implementing agencies must monitor and provide adequate supervision for the smooth completion of the project,” he added.

Seven electrocuted, five others injured at Amanfrom
59 minutes ago