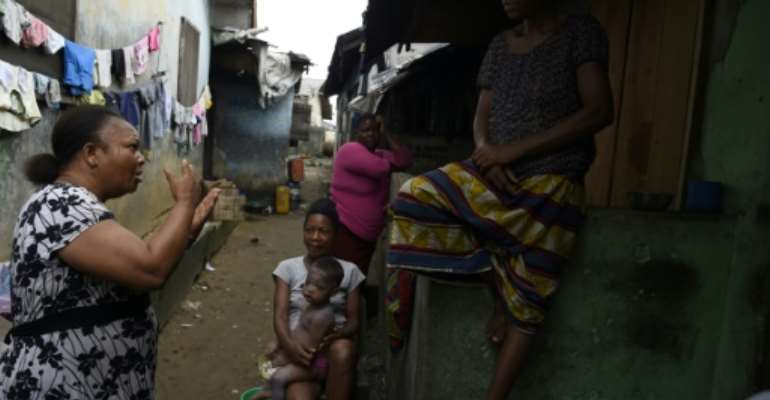 "They forced their way in at around 2am. They raped us. And when they left, they stole our phones and money."

In those simple words, Sarah describes the nightmare that she and her flatmate endured when two armed men broke into their apartment in Port Harcourt, Nigeria's oil hub.

Who the men were was, and remains, a mystery. Both wore masks.

Reeling from shame and fearful of stigma, the 25-year-old did not tell anyone she had been raped. Not the police, her family, even her friends.

"Here you don't talk about these things," Sarah -- her name changed for the purposes of this story -- told AFP.

Eventually, Sarah, a trained nurse, became worried about her health and plucked up the courage to go to a clinic run by Doctors Without Borders (MSF) that specialises in sexual violence.

There she received treatment. Eventually she found the strength to recount her tale to a psychologist.

The figures for admissions to the little clinic speak amply about the scale of rape in Port Harcourt.

Since the start of the year, more than 1,200 patients have sought help there. In October alone, there were 148 new admissions.

Port Harcourt has many of the fundamental problems of poverty and inequality which are familiar to Nigeria's big cities.

But it is also in the grip of notorious gangs called "cults," which emerged from university campuses to become organised crime groups and frequently engage in blood rituals and oaths.

They carry out raids, ransom kidnappings and other crimes, in which the victim often suffers sexual violence.

"When there are cultist clashes in the community, people scatter everywhere, and armed robbers go inside the houses and they rape the girls," said Christine Harrison, an MSF coordinator in the rundown district of Diobu.

The 42-year-old mother patrols the gritty streets, handing out an emergency number that victims can call -- a task that she has been doing for two years.

"My job is to let the women know that they need to stand up for their rights," she said. "Before, rape was a normal thing."

The MSF rape awareness campaign includes messages on local radios and stickers which are handed out on public transport.

The situation, while grim, is changing bit by bit -- a shift that came after nine women were drugged and strangled in Port Harcourt hotels in a string of gruesome ritualistic-style killings.

"We never saw something like that. The whole city just rose up. We said: 'Enough is enough'," said Ibim Semenitari, a well-known local activist who led protest marches joined by hundreds of feminists.

A police commissioner in Port Harcourt had initially urged women not to go out at night, and said that the victims were prostitutes -- their bloody fate could be avoided by "re-education," he suggested.

As pressure from the street mounted, the police arrested the supposed killer, cult member Gracious David-West. His trial opened on December 9.

"His arrest was a huge success for us," said Doris Onyeneke, a campaigner and head of a centre for protecting and training women called Mater Dei.

"Women are vulnerable in Nigeria, and even more (so) in Niger Delta region," she said, referring to the country's oil hub.

The gangs are based on a twisted notion of masculinity, she said: "Members have to be aggressive, strong, kill, make a lot of money."

Her centre, where she is dubbed "Lady Doris," takes in many girls in need, some of them minors.

Theresa, a 21-year-old trainee seamstress, put the final rhinestones to a magnificent hand-made evening gown as she described the plight of many women in Nigeria.

"We don't have equal rights," she said, her back straight and an unflinching look in her eyes.

"Women are the weaker vessels. For them, we are good only in the kitchen or in bed."

She added: "I used to be very shy, but now I can be bold enough and speak to the public. If we are empowered, we are less vulnerable. "