...At The 11th Speech And Prize-Giving Day Held At Koforidua SECTECH
By Kofi Asante || Koforidua 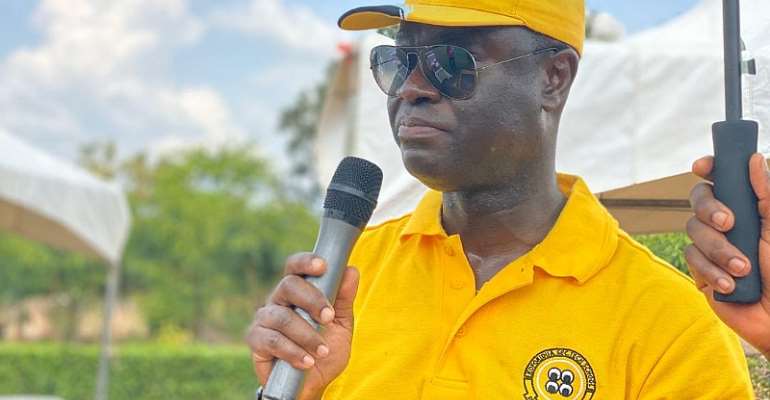 Over the weekend, Koforidua SecTech held its 11th speech and prize-giving day as a part of the major events characterizing this year's homecoming which was under the theme; “a decade of sustained support to mother SecTech ."

The association used the occasion to donate items worth over GHC15,000 to the pediatric ward of the Koforidua central hospital. They donated 20 pulse oximeters, which was one of the genuine request the department of the hospital made when the association when on needs analysis recce. 30 mattresses, 30-bedsheets, and pillows 10 cartons of assorted detergents, bleach, and many more items

At the award ceremony, the guest speaker Captain Solomon Quainoo, who is also an old student of the school spoke on the topic “ focus and discipline, the game changers of success ." Using his personal life story in becoming an astute pilot of Emirates A380 which is the biggest passenger in the world, told the students to exercise a high level of focus, and discipline in a fast-changing world, else lose out of the game of success. He used David and Goliath's story also to make a case of how discipline and focus are important in the preparation stage of one's career and education.

He used the occasion to call on all old students of association to be active contributors to aid complete their flagship project the multi-purposed assembly hall. He again used the development success of United Arab Emirates to buttress his point that, heavily invested strategic projects changed the fortunes of Dubai and Abu Dhabi which were once a severe desert location.

On the part of the association, the president, Scofray Nana Yaw Yeboah stated that the awards and the ceremony which was sponsored by the association are part of the strategic direct investment they are making into the lives of the continuing students as well as a way to show appreciation to the hardworking staff of the school.

They use the homecoming to launch a robotics club which is the brainchild of the association and as well adopted the national science and maths, quiz team. He said that the association is making a lot of efforts to make Sectech a center of excellence to epitomize their cliché “Eastern Varsity”

The chairman of the speech and prize-giving day, Mr. Michael Okyere Baafi the CEO of Ghana Free zones authority and a candidate in the parliamentary primaries of the NPP in New Juabeng South constituency presented the overall best WASSCE teacher with a tablet on top of the TV set the association gave him, he again gave a laptop to the overall best teacher aside the fridge he got from the association. The headmaster was not left out of the laptop Mr. Baafi also contributed on the day.