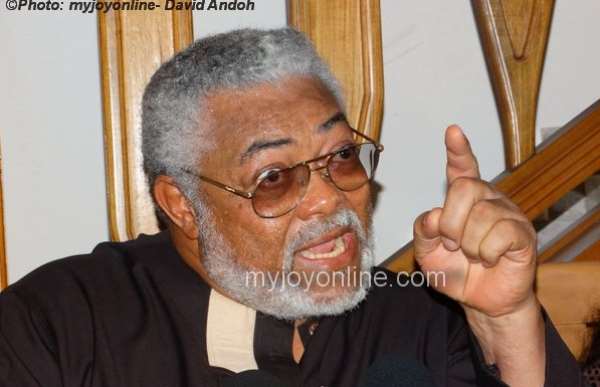 Ex-President Jerry John Rawlings has denied claims by Major (Rtd) Ibrahim Rida, that he was hurt by his superiors after being asked to refund $4,000 he had wasted.

In a strong-worded statement Sunday, Mr Rawlings said he did not recall being asked to pay back some $4000.

According to him, “if I was asked to, it would make sense considering the fact that I had to cut off the flying instructors’ course in Peshawar, Pakistan right at the beginning of the course and get back to the mission to help save this country by removing Acheampong to enable General Akuffo to take over.”

The former Squadron commander who was almost killed during the June 4th uprising last week narrated to JoyNews’ Raymond Acquah on ‘UPfront’ the reason behind Mr Rawlings bitterness in the running to his first coup attempt.

He was speaking ahead of the release of ‘Scars of the revolution’, a sequel to JoyNews Documentary ‘Who killed the Judges’ which was aired in October 2018.

‘Scars of the revolution’ discloses the act of savagery leading to and the aftermath of one of the country’s darkest moment in history, the June 4th uprising.

What a shame! A real shame indeed. Kindly give your children and some of the good people you've known some decent space; be a little truthful and let them live their lives without this shame.

You don’t appear to have changed, Major Rida. You should leave these fabrications to those who’re politically and financially profiting from damaging June 4th and December 31st. There were a number of interesting and near-tragic events and meetings...all very true that you could talk about.

I am shocked that you would lend yourself to such falsehood. Your uncle Gen Akuffo had a good enough space of time from General Acheampong’s arrest to do what was expected of him but no, he obviously couldn’t see that his refusal or inability heightened the pressure and hostility again. Your head was equally stuck in the ground. Some of you were oblivious of the danger in the air.

Rida, I do not recall being asked to pay back some $4000. And if I was asked to, it would make sense considering the fact that I had to cut off the flying instructors’ course in Peshawar, Pakistan right at the beginning of the course and get back to the mission to help save this country by removing Acheampong to enable General Akuffo to take over.

Amongst the many conversations we had, do you recall suggesting that I would have to escape after dropping that bomb? Do you recall that General Akuffo, in one instance cancelled a foreign trip with the expectation that I would have dropped the bomb the night before and he would necessarily have to be in Accra to take over as Head of State? Do you recall that particular morning when you drove to the Airforce station to come to ask me "what happened”, "what went wrong"?

The second thing that put me off collaborating with you was the comment you made the night I suggested (in your sitting room) some of the good senior officers who General Akuffo could bring on board his government.

Do you recall the comment you made when I suggested a senior officer I thought was clean enough? You said with irritation and annoyance in your voice that "we don't need that holier than thou pepe man".?

Major Rida, all said and done, because of your treachery, when you attempted to call on me a few days after the June 4th explosion at Nana's Flat, one of the infantry guards corked his weapon and nearly shot you. Do you recall I spun around and jumped from the veranda and planted my body between you and the soldier, to take the bullet for you to save your cowardly life? And you dare to suggest, on a slimy Joy TV programme that I was begging for mercy and to be pardoned? No Rida. 15th May failed because I made it so to prevent the blood-letting that night. Take a look at the trial and tell me that’s the posture of an officer begging to be pardoned.

That soldier and many who knew what you did or did not do would read this new nonsense of yours with regrets. Do you remember it took a while to cool down their anger? Dear Rida, you should have left these fake and brainless fabrications to the Alolgas, Adabugas and the Boakye Djans to continue their cowardly and mercenary behaviour. The exposure time for them, is quite due.

I have given cover to a number of uniformed personnel who were not brave enough for June 4th, December 31st and others. There you are, repeating some of the manufactured 40-year-old lies about Boakye Djan leading soldiers to rescue me. Let me assure you that guy never led any soldier to rescue any goat anywhere. You cannot be that ignorant of another claim, that he was directing the '79 revolt from inside one of the Recce armoured vehicles? Even as the Recce armoured squadron was under siege and some of the Senior NCO commanders had retreated from engaging in the battle and waiting to join the infantry units, Boakye Djan had long escaped from his unit around 3 o' clock that morning of June 4th, when according to him he heard one of the soldiers cry out, "kill all the officers". What he, however, did not say was that he fled to the bush behind the 5BN quarters and found himself crouching next to another Captain on the bush track and with the approach of dawn, the Captain said he headed east towards Tema where his parents lived whilst Boakye Djan headed westwards to Achimota school. I would dare him to invite the unnamed officer to deny or confirm what I’m saying.

It wasn't until late that afternoon that he was fished-out of his girlfriend's quarters by a detachment. As should have been expected, he refused to open up until Flt. Lt. Lee threatened to climb up and break down his woman’s door. Another poisonous and cowardly person I covered up for was Alolga, who should have been in position at 5BN after I had taken charge of the Recce grounds. Albert and I had commandeered two of the armoured vehicles. Alolga was nowhere to be found or seen at that crucial moment of 31st. It wasn't until the fight of that day was over around 8pm, and some of us had gathered and sitting by the gutter at the Recce Regiment administration block, that Alolga came walking sheepishly and nervously in a very crumpled uniform following a more courageous Chris Atim. I kept quiet about his cowardly disappearance and went on to add him to the membership of the PNDC.

Many brave soldiers and officers have survived many fabrications and revisions of historical events in silence up to this point, don't push it any further, Rida. Your deformed character always affected and took away from your personality the appearance of a fine soldier. You betrayed the trust of your own men and after all these years have resorted to resurrect yourself this way?

The distrust and hatred that your behaviour evoked amongst the men, made it unsafe to bring you back on board. I have covered up for a lot of personnel because I am not unaware of how courage can desert some of the brave ones.

Your stories don’t add up and the current generation of officers and soldiers, I hope, can see through you and your kind. I didn’t think someone like you in spite of some of your character defects would sink so low. Is it not odd that you have chosen now to come out? You had to wait till that generation of officers, passed out, passed on or retired. You now find it politically expedient to come out with such mindless distortions because a lot of the actors from both the ranks and officers would have retired by now. Having been close to me you can now play the opportunistic card. If they didn't know me for who I am, all that I said at the trial wouldn't have ignited their emotions.

Yes, I was an angry man. Ghana was on its knees and real action was needed and I stood up to do a man’s job. You cannot reduce the story of June 4 to your illusions and pettiness! Cowards like you convince me evil has truly triumphed!!!