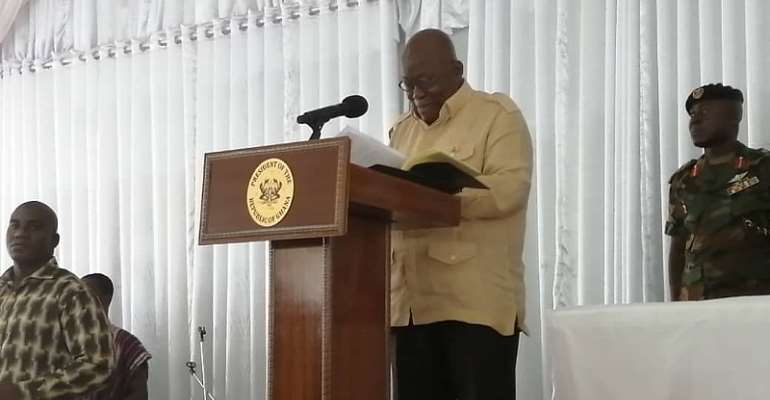 It ought to be crystal clear to Prof. Emmanuel Asante, the retired prelate of the Methodist Church of Ghana and Chairman of the National Peace Council (NPC), by now, that President Addo Dankwa Akufo-Addo made his very painful and morally and emotionally harrowing decision to scuttle the December 17 Referendum, aimed at healthily and progressively democratizing Ghana’s local politics, primarily based on the scandalous treachery of his three-living predecessors and the leaders of the country’s main opposition party, namely, the National Democratic Congress (NDC), and not because the very visionary decision to have Article 243(1) and Article 55(3) amended had not been democratically informed by a broad consensus of stakeholders (See “Peace Council Commends Akufo-Addo for Aborted Referendum” Modernghana.com 12/4/19).

In his nationwide address putting the prescheduled referendum on hold, at least for the time being, the President clearly noted that he had painstakingly discussed the imperative need to further deepen Ghana’s democratic culture at the local government level during his maiden meeting at Jubilee House with former Presidents Jerry John Rawlings, John Agyekum-Kufuor and John Dramani Mahama, and that he, Nana Akufo-Addo, had been left with the unmistakable impression that tabling Articles 243(1) and 53(3), both two constitutionally entrenched clauses, for amendment, as they were undoubtedly stultifying and regressing the onward democratic progress and development of the country, was definitely and perfectly the right thing to do. Of course, most Ghanaians are also well aware of the fact that the need for the amendment of Articles 243(1) and 55(3) has been extensively discussed in Parliament, via the Council-of-State, whose approval, sought and given, prior to the decision to table the same in a nationwide referendum, as well as conferring with the leaders of the various legitimately registered political parties in the country and other Civil Society Organizations (SCOs), had facilitated the decision to hold the referendum.

Consequently, Nana Akufo-Addo’s rather curious observation that he needed to “more broadly consult with stakeholders” was obviously a diplomatic tack calculated to appeasing the thoroughgoing corrupt and pathologically cynical leaders of the National House of Chiefs, in particular the President and the Vice-President of the NHC, who clearly appear to be more concerned with their democratically unorthodox entitlement to 30-percent representation in our assemblies. Well, my informed prediction here is that the politically regressive and morally benighted decision by the leaders of the National House of Chiefs to impeach the integrity of the December 17 Referendum has significantly vitiated whatever vestigial modicum of respect most intellectually and professionally enlightened Ghanaian citizens harbored for the fast-fading institution of chieftaincy in the country going into the aborted referendum.

It is also significant to observe that in spite of the fact that Metropolitan, Municipal and District Chief Executives (MMDCEs) have been known to receive two-thirds majority approval by local representatives prior to being officially named to their posts by the President (generically speaking), nevertheless, it has unsavorily become equally routine and commonplace to see some of these same local government representatives roundly reject a remarkable number of these MMDCEs from time to time. Which is also precisely why it has become an imperative necessity to have all these Chief Local Government Administrators (CLGAs) directly elected by the people whom they have been nominated and/or appointed to govern. This is also the main reason why many of us had hoped that the President had not put the December 17 Referendum on ice, as it were, irrespective of how temporary or temporally transient this may be.

As for Prof. Asante’s observation that the referendum had polarized Ghanaian society, such observation is at best quaint and comical. One wonders where the former Bishop and Head of the Methodist Church of Ghana has been living for the past four decades, at least. For, it goes without saying that from the beginnings of postcolonial Ghana, our society has always been rankly polarized ad-nauseam. Indeed, it can be quite accurately asserted that Ghanaians thrive on conflict and political polarity and polarization as all humans naturally are and ought to be.

More Feature Article
ModernGhana Links
The Role of Tax Haven in Money Laundering Activitie
NPP Is the Lesser of Two Evil Political Parties
Hello, Mr. Baako, Nkrumah’s Ghana Was Thoroughly Corrupt
Ghanaians Mustn’t Be Proud That Ghana Has Become An Incurable Corruption-Infested Country
Chronology of the Tradition of the United Party (UP)
Production of National Security Strategy Document Puts Akufo-Addo Well Ahead of the Pack
The Days of Redeployment or Dismissal of Public Servants on live Radio and TV are Long Gone; Adhere to the Labour Law
Professor Moghalu’s Journey and Personal Story
Papers Instead of Human Lives: The Sentencing of Daniel Hale
TOP STORIES