...as he presents new vehicles to GAF
By Mohammed Saani Ibrahim 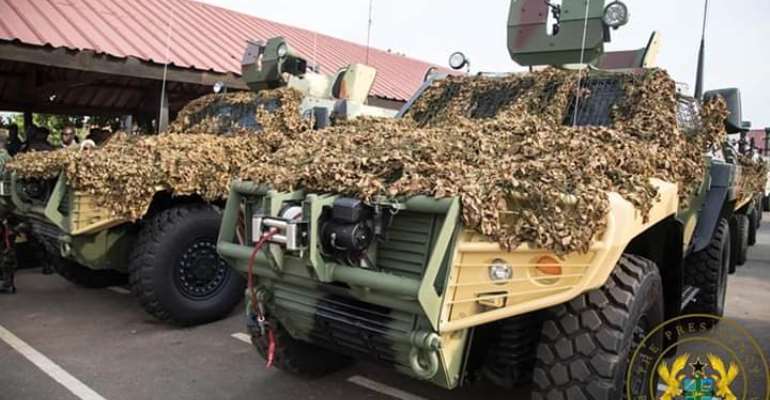 President Akufo-Addo, has presented a number of vehicles to the Ghana Armed Forces, in fulfillment of a pledge he made to them this year.

Presenting the vehicles at a ceremony at Burma Camp, President Akufo-Addo recounted a pledge he made to the Armed Forces on 21st March, 2019.

“I indicated, at that event, that, during the course of this year, we will provide the Army, in addition to the 138 staff and operational vehicles of various categories that had been supplied to you in February this year, with 30 Armoured Personnel Carriers (APCs),” he said.

The President continued, “I believe I have more than lived up to this promise, as I am here to present to you thirty-three (33) Armoured Personnel Carriers; forty-one (41) assorted Toyota vehicles; three (3) water tankers; one (1) self-loading recovery truck; one (1) refrigeration van; and five (5) utility vehicles for waste disposal and management.”

Government, he said, is constantly kept apprised of the needs of the Armed Forces, and, as the Commander-in-Chief, he is taking steps to ensure that their needs are met.

“We recognise that our vision of ensuring equitable distribution of development, progress and prosperity to all parts of the country can only be made possible in an atmosphere of peace and security. We are determined to continue in this vein, and meet the needs of the Armed Forces,” the President added.

He commended them for their outstanding performances in the recent joint security operation, KOUDANGOU, and in the on-going Operation CONQUERED FIST, which are intended to create a secure, peaceful atmosphere at the northwestern, northern and northeastern borders of the country.

President Akufo-Addo urged them to continue to collaborate with the Ministries of National Security, Interior, Foreign Affairs, Finance, and with the Ghana Revenue Authority, as well as all relevant agencies, to help maintain a resolute, robust front that will deter potential aggressors from having any thoughts of attempting to destabilise the country or derail the socio-economic gains chalked so far.

“As an institution noted for its discipline, I do not have to emphasise to you the need to pay particular attention to the maintenance of these vehicles, and to use them for the benefit of our country and its people,” the President added.