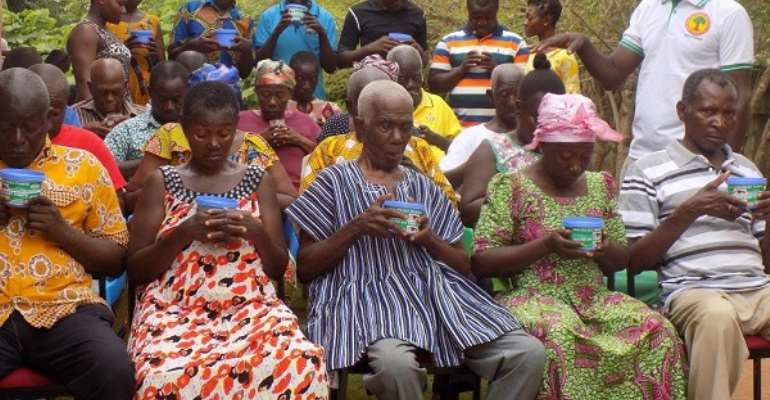 Some patients undergoing treatment at the Odopee Herbal Research and Learning Centre at Mankessim. Observing the process is Mr John Kofi Sackey, the herbalist (in white 'T' shirt)

Mankessim, a commercial town in the Central Region, is noted for foodstuff, fish and meat. But for some time now, people from all walks of life have been trooping to the town not to shop for these items but to seek healing for various eye challenges, including blindness.

This follows the discovery of a medicine by a herbalist in the town, which has been acclaimed to cure all kinds of eye diseases, including the dreadful glaucoma, which medical doctors say has no cure.

Observation
The herbalist, 60-year-old Mr John Kofi Sackey, aka Odopee, is the proprietor of Odopee Herbal Research and Learning Centre at Mankessim.

The Daily Graphic has visited the centre twice in the last two weeks and met many people receiving treatment.

Unlike the orthodox solutions, which prescribe various forms of surgery and medication, the herbal solution was not applied directly on the eyes. Rather, the herbalist pours the liquid preparation onto a piece of dry wood, puts the wood in a small plastic container for the patient to watch with widely opened eyes for 10 minutes.

The Daily Graphic also observed that the patients, most of them above 60 years, repeated the process three times a day.

After exposing the eyes to the invisible rays of the drug, the patients are made to walk for some time.

They rest for two or three hours and resume the treatment.

Mr Sackey said some of the patients regained their sight on the first day of treatment.

Health authorities
The Mfantseman Municipal Director of the Ghana Health Service (GHS), Mr Martin Daanko, told the Daily Graphic last Wednesday that even though the drug had not undergone any scientific analysis, his personal observation at the herbal centre and the numerous testimonies of cured patients pointed to the efficacy of the herbal medicine.

He said he was particularly happy that the medication was not applied directly on the eyes.

The Municipal Health Director, who visited the centre in the company of the Human Resource Manager at the Municipal Health Directorate, Mr Emmanuel Asante-Aboagye, promised that his outfit would help Mr Sackey to go through the various tests required to certify his herbal preparation for eye diseases at the Centre for Plant Medicine Research, Akuapem-Mampong, and the Noguchi Memorial Institute for Tropical Diseases.

Collaboration
He, however, advised Mr Sackey to collaborate with the Saltpond Government Hospital by sending all eye patients who reported at his herbal centre to the facility for examination before attending to them, and resend them to the hospital to certify if they had been completely cured.

He said in their routine rounds to register clients at Mankessim for the NHIS, they came across the centre.

He said to his surprise and that of his staff, they saw people being treated of various eye diseases and those who had been healed who gave testimonies.

Rev. Dr Lamptey, who is also an international evangelist, described the work of Mr Sackey as rare and to the best of his knowledge the first of its kind in the world.

He called on all stakeholders in the health sector to assist Mr Sackey to perfect his act and expand his herbal centre.

300 Patients
Mr Sackey said he had administered the medicine on more than 300 patients, who had regained their sight between a day and a year, depending on the severity of the disease.

The eye diseases the herbalist claimed he had cured included cataract, glaucoma, inflammation of the eye, itching, short and long sightedness.

Most of the patients often reported to his herbal centre with assistive devices, such as white canes, but returned home on their own because they got cured completely and could see, Mr Sackey told the Daily Graphic in Mankessim.

No charges
Mr Sackey does not charge his patients for the treatment, and when asked why, he said blind people did not earn any income because they were mostly unemployed due to their plight.

When further asked how he managed to cater for himself and family, he said the income generated from the treatment of other chronic diseases was his only source of income.

Profession
Even though Mr Sackey is a Minister of the gospel at the Mankessim Estate Branch of the Church of Christ and a welder trained at the Accra Technical Training Institute (ATTI), he has abandoned the two professions because he could not combine them with herbal medicine practice.

He conducts morning devotions with his patients daily before starting treatment for them.

Mr Sackey, who has practised herbal medicine for 46 years, started at the young age of 10 under the tutelage of his late father who worked as a herbal practitioner for 70 years.

The herbalist and minister has no workers but is helped by his wife, Mrs Dorothy Sackey, who dispenses the herbal drugs, hence keeping the trade secret within their loop.

He said he had registered with all the health-related organisations such as the Food and Drugs Authority (FDA) and renewed his licence on October 15, 2019.

Testimonies
A native of Youpongon, Abidjan in Cote d’Ivoire, Mr Koffie Sala Germain, who regained his sight on the first day of treatment, told the Daily Graphic on telephone from Abidjan that he got blind after being attacked by measles when he was three years old.

The 53-year-old man said he was now a teacher in a School for the Blind in his hometown, having educated himself as a blind person from basic to the tertiary level.

He said he attended a funeral with a group of Ivorians at Mankessim in September this year and heard of Mr Sackey’s herbal exploits.

He visited the herbal centre for a trial, since traditional and orthodox treatments could not restore his sight.

After receiving the herbal treatment three times on the first day of his visit, he regained his sight.

Another cured patient, Mr Wilberforce Andrew, an accountant, said he later led a team of medical doctors about four months ago to observe Mr Sackey’s activities at his herbal centre and found his treatment as very efficacious.

“I have also conducted a year’s research on Mr Sackey’s herbal drug for eye diseases and realised that it is the first of its kind in the world,” Mr Andrew stressed.

Other beneficiaries, who commended him highly, in an interview with the Daily Graphic, also appealed to the government, corporate bodies, individuals and non-governmental organisations to assist him to expand his herbal centre in order to treat many patients.

A 54-year-old computer technician, Mr Oscar Obeng, who was completely blind in 2008 and regained his sight in September, 2019 at the Odopee Herbal Centre, volunteered to become Mr Sackey’s personal secretary, a job he has been doing since.

According to Mr Obeng, after many fruitless treatments, he was confined to his room until his mother took him to the centre where he regained his sight.

An Accra-based pharmacy technologist, Mr Kwame Afful, said doctors had declared him blind from glaucoma which was at an advanced stage.

“Luckily, a sister in church who hails from Ajumako took me to the Odopee Herbal Centre three weeks ago and I have regained my sight,” Mr Afful said with joy and showed the reporter his hospital card.

Another patient, a 92-year-old herbalist based in Nungua, Mr Andoh Tagoe, who was blind for 10 years and also suffered from stroke and severe headaches, received healing of the three ailments in June this year.

Akatsi South: Pastor and wife allegedly killed by unknown as...
57 minutes ago