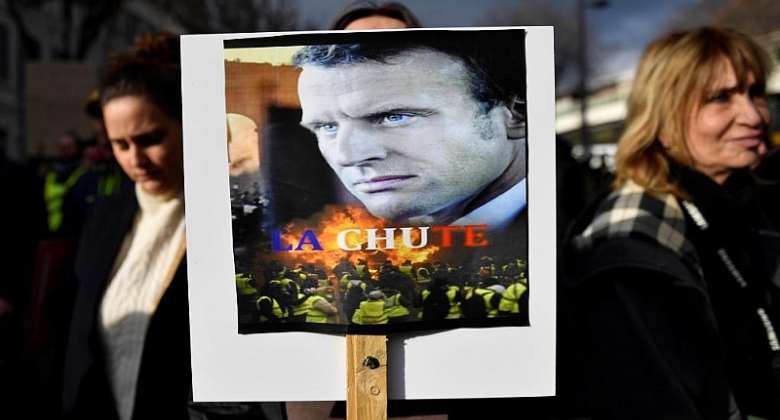 French President Emmanuel Macron faced his toughest challenge yet on Thursday as a nationwide strike challenging his pension reform crippled much of the country. Already weakened by months of often-violent Yellow Vest protests, experts question whether he will be able to push through one of his key campaign pledges.

The strikes saw more than half a million people hit the streets Thursday to protest the government's planned overhaul of the pension system.

The showdown triggered three weeks of total paralysis, forcing the-then government of Alain Juppé to back down.

Fast-forward 15 years later to another equally chilly 5 December and a new nationwide strike by transport workers, teachers and other professionals has once again brought the country to a near standstill.

However, for the government, the parallels end there.

"I know many people would like to see a repeat of 1995 because Thursday's protests are occurring on exactly the same day as that nationwide strike but the context is different," explains Aurore Bergé, a spokesperson for Emmanuel Macron's Republic on the Move party.

The strikes are a major test for the president who wants to implement a signature campaign promise that would set up a universal retirement system.

Retirement benefits in question
"Our current system is neither legible nor fair," Bergé told RFI, referring to France's 40 different retirement plans, all with different ages and benefits.

"Our lives have changed. We no longer work for 40 years in the same company under the same conditions," she said.

For the government, allowing railway workers and others to retire early, is no longer relevant because society has modernised, notably with the use of robots.

Macron argues a points-based system in which each day worked earns points for a worker's future pension benefits would be fairer and simpler, especially for those who are self-employed and farmers.

"It will change their lives drastically," because currently "they take home less than 1,000 euros per month," Bergé commented. The government wants to ensure that each person has a minimum of 1,000 a month.

But unions say the changes would effectively require milllions of private sector workers to work beyond 62 if they want to receive a full pension.

Don't touch pensions
Macron, a former investment banker, has so far succeeded in pushing through controversial labour and tax reforms aimed at boosting hiring, as well as overhauling the state rail operator SNCF.

It is a different matter when it comes to the pension system, seen as a sacred entity.

"You touch pensions, you touch a whole history of social fights," says Philippe Moreau-Chevrolet, a communications expert and teacher at Sciences Po University.

"The special regimes [recognising the pénibilité or drudgery of a person's work], took layers and layers of negotiations, harsh negotiations sometimes with major strikes, and all this history is at stake. It brings back the memory of old fights. That's why it's so tense," he told RFI.

Prime Minister Edouard Philippe, who has acknowledged French workers will gradually have to work longer, is set to unveil details of the reform, yet unknown, on 12 December.

"It's a peculiar situation, since we don't actually know what the reform is," continues Moreau-Chevrolet, faulting the government's method.

"If the government had really wanted to do this reform well, it should have proceeded differently by talking to each social category separately and trying to get some concessions and build along the way."

Instead, "it decided to go into an abrupt fight with every category at the same time," he said.

"Anger has been building up and now it's exploding," reckons Moreau-Chevrolet, referring to the various disgruntled groups who for the first time have come together in protest, with Yellow Vests demonstrating alongside trade unionists.

"The Yellow Vests have shown that the government is weakened and could be taken in a fight," says the communications expert.

French daily Le Monde wrote in its Thursday edition "the next days are a decisive test for the head of state," while trade unions are already declaring victory.

"The unions have gained more control yes," admits Moreau-Chevrolet "but neither they nor the government are able to control what's happening in the country. It's a situation for the moment where nobody wins."