Gov't Must Thank Us For Doing Their Work - GUTA Rep 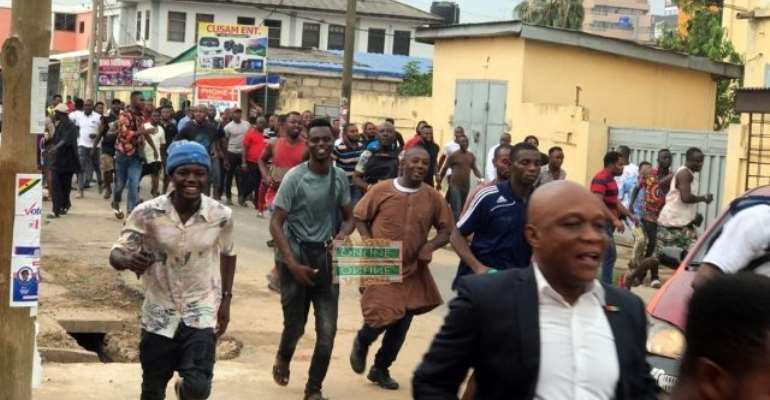 The Greater Accra Regional Secretary of Ghana Union of Traders Association (GUTA), Nana Kwame Poku, has said the Association’s stance against foreign retailers is something government must commend.

“Government should rather applaud us,” he said on Adom FM’s Burning Issues on Wednesday, December 4, 2019.

Speaking in Twi, Nana Poku said God will deal drastically with any leader who tries to favour foreign retailers in the impasse.

He further described as hypocrites some authorities who are asking GUTA to exercise patience while foreigners keep breaking the law.

Meanwhile, Greater Accra Regional Chairman of GUTA, David Kwadwo Amoateng, speaking on the same show said members will keep the shops of the foreigners closed until they hear from the President again.

He said Ghana's laws stipulate that foreigners should not do retail business so any foreigner doing that is breaking the law.

The shops will remain locked until President Akufo-Addo speaks, he said in Twi.

Some GUTA members last Sunday night locked up the shops of about 100 traders they suspect are foreigners who are breaching of the Ghana Investment Promotion Centre (GIPC) law.

During his tour of the Greater Accra region, President Addo Dankwa Akufo-Addo asked GUTA to allow the ongoing consultations between them, the Trade Ministry and Ghana Immigration Service, on the other hand, to be completed in a bid to find a lasting solution to the problem.

“People cannot take the law into their own hands and enforce the law. If we do that, Ghana will become chaotic. We have to be careful about this phenomenon of taking the law into our own hands about situations that government is yet to resolve” President Akufo-Addo said.

“Please allow the work that the Trade Minister and the Committee are doing with the Immigration Authorities to progress. I am confident that if we allow same to work, your issues with foreign participation in the retail business will soon be a thing of the past in line with the law” President Akufo Addo urged.