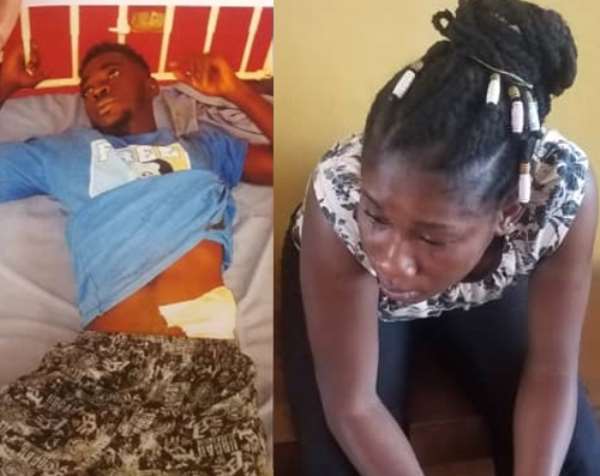 The Bekwai Circuit Court has sentenced a jealous woman who stabbed her boyfriend with a broken bottle and then set his room ablaze to two years imprisonment.

Rose Antwiwaa, 24, hairdresser, was convicted of unlawfully causing harm to Patrick Opoku, with the use of a weapon, contrary to section 69 of Act 29/60, on December 2, 2019 at Esereso-Adagya in the Bosomtwe District of the Ashanti Region.

She was also convicted for causing unlawful damage to the property of Naomi Frema, landlady of her boyfriend, by setting Patrick's room on fire, contrary to section 172 of Act 29/60.

She was sentenced to two years on each count to run concurrently.

The court, presided over by Fredrick Nawura, heard the convict had come to visit the victim and spent the weekend with him at his residence during which the call came through.

Inspector Ofori narrated that convict Rose Antwiwaa became quarrelsome after the call which compelled Patrick to leave the room.

According to him, the victim returned to find out that the door knob had been electrified, a plan made by the convict to electrocute him.

He stated that this action of Antwiwaa also infuriated Patrick, who packed the belongings of Antwiwaa into a bag and asked her to leave his room.

Prosecutor said the convict did not budge, which forced her boyfriend to walk out for the second time.

Patrick returned to the room only for Antwiwaa to stab him on the left side of the ribs after rushing in upon hearing an unusual noise.

Inspector Ofori disclosed that the victim, upon sensing danger, dashed to his friend's house while he was bleeding profusely to take refuge.

Dominic rushed Patrick to Ayush Hospital at Feyase for medical attention after which he reported the incident to the Feyase police.

Prosecution said Dominic later received call, whilst at the police station that his friend's room had been set on fire by Antwiwaa.

Police proceeded to the scene and met personnel of the Ghana Fire Service dousing off the fire, by which time Rose Antwiwaa had fled.

He disclosed that the fire, which spread to four other adjoined rooms, destroyed all personal belongings of Patrick and other tenants in the house.

Later, the convict was arrested and handed over to police. She admitted the offences in her caution statement.

Anti-LGBTQI+bill not to engender hatred for persons, meant t...
2 minutes ago

JB’s two phones tendered in as evidence
2 minutes ago