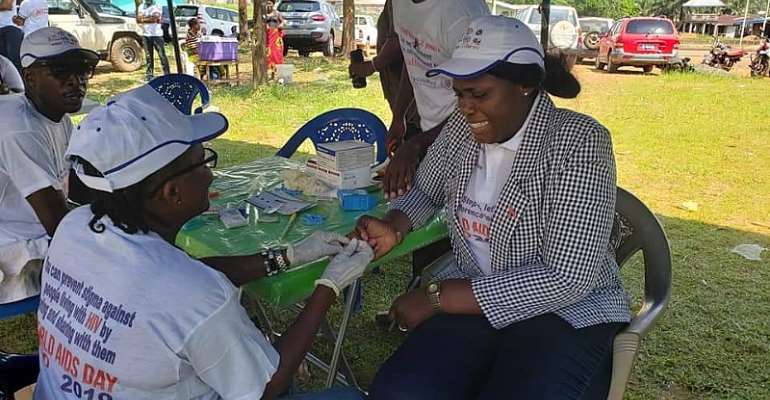 The National AIDS Commission of Liberia (NAC) and Partners have officially observed the 2019 commemoration of the World AIDS Day.

Historically, the day was set aside on December 1st 1988 to raise awareness of the AIDS pandemic caused by the spread of HIV infection and mourning those who have died of the disease since the beginning of the epidemic.

Government and health officials, non-governmental organizations including partners and individuals around the world observe the day, often with education on AIDS prevention and control.

According to the World Health Organization, this 2019 World AIDS Day provides an opportunity to translate commitments into action, to ensure the role of communities for HIV and health progress are both celebrated and accelerated.

As part of Liberia's commemoration of the day, the National AIDS Commission in collaboration with the Ministry of Health and the National AIDS Control Program conducted HIV/AIDS counseling, testing, treatment, street parade, panel discussions on the role of the community in reducing HIV stigma and discrimination, and quizzing competition among in-school youths.

As stated by WHO 2019 report "HIV remains a major global public health issue, most people living with HIV live long and healthy lives thanks to effective ways to manage the infection. However, people, particularly younger generations should be aware and obtain skills to access HIV prevention, testing, treatment and care".

In an effort to curb HIV/AIDS virus, NAC and partners commemorated the official closing program on Monday, December 2, 2019 in Buchanan, Grand Bassa County. Presenting an overview of the significance of the day, Commissioner Theodosia Slewion-Kolee - Chairperson of the National AIDS Commission told participants that Liberia's last Demographic Health Survey (LDHS) of 2013, shows that Montserrado, Grand Bassa and Margibi account for 70% of the national HIV burden, but current programmatic data suggests that the virus is more becoming visible in the South East and other counties.

"Stigma and discrimination are still hindering access to testing and treatment, especially for young people, women and key populations who accounted for more than half of the new infections globally". Commissioner Kolee added.

The NAC Boss said these behaviours will only undermine progress to achieving targets - cautioning that time to correct the wrongs is now because time is not our favour.

"With the virus spreading across the country, the stepping in of the communities is critically important to ensure behavioral change. We must join efforts to discourage stigma and discrimination, create more awareness on prevention, encourage HIV testing and treatment adherence for everyone". Mrs. Theodosia Slewion-Kolee stressed.

The Commissioner pointed out that the National AIDS Commission has begun to strengthen its partnership based by reactivating various Technical Working Groups (TWG) on HIV, School health clubs, Counties HIV Steering Committees and the Ministries, Agencies and Commissions HIV Coalition.

"Our world is changing, Liberia needs to adjust promptly and sustain its efforts to eradicate the virus from our society. We need to do more by the involvement of the Communities as a strength, bringing innovation, synergies and reinforcing strategic partnership. Investing in health is not a political will, it is a political choice. This is a choice that we must make as a country, by taking ownership of our health System". Mrs. Kolee noted.

According to the National AIDS commission Boss, in a bid to end the epidemic in 2030, the United Nation’s program on HIV/AIDS (UNAIDS) set up an ambitious goal in 2013 to fast track the response; The UNAIDS 90-90-90 Targets.

Reporting on Liberia's progress and challenges toward 90-90-90 targets, Commissioner Kolee reported that in 2018, 93% of pregnant women living with HIV received antiretroviral medication to reduce the risk of mother-to-child transmission of HIV and Liberia remains one of the few countries in the region that has successfully scaled up PMTCT coverage to over 90%.

The NAC Boss is quoted by saying, out of the 39,144 that are estimated to be living with the disease in Liberia, only 13,144 persons were identified and tested thereby (representing 66%) under the first 90, and 12,120 persons living with HIV have been placed on treatment (representing 53%) under the second 90 and 6,593 (representing 52%) have their viral load suppressed under the third 90. Each year, an estimated, 1,900 people get infected with the HIV virus.

In conclusion, Commissioner Theodosia Slewion-Kolee expressed her institution's deepest appreciation to His Excellency Dr. George M. Weah for his renewed commitment in supporting the fight against HIV/AIDS. She also acknowledged the contributions of National and International partners for their persistent contribution to the national response.

Madam Morgan cautioned participants of the psychological effects associated with stigmatization of persons living with HIV. According to the keynote speaker, studied have shown that stigma may result to mental disorders like low self-esteem, isolation, depression, feeling of hopelessness or lose of control which can ultimately results in loss of motivation to remain in care and non-adherence to treatment and even suicidal intents.

"Liberia Network of Persons Living with HIV was established to address among other things stigmatization and a concreted effort in meeting UNAIDS “Fast-Tracking Approach on Ending the AIDS epidemic by 2030” or “90-90-90” goal which aims to make sure 90 percent of all people living with HIV know their status, 90 percent of them have begun antiretroviral treatment, and 90 percent of those on treatment have a suppressed viral load by 2020". Madam Morgan averred.

While it is an established fact that progress has been made by Liberia in meeting UNAIDS 2030 goal, there exist huge challenges in achieving the "90-90-90" goal by 2030.

She concluded by encouraging all especially young people to take advantage of early testing as it is the gateway to treatment and effective treatment reduces the viral load to an undetectable levels and as such a person can't pass on the virus to someone else.

In Special Remarks, Liberia's Minister of Health Dr. Whelimina Jallah calls on persons living with HIV to accept their status and remain committed to treatment at all times. Dr. Jallah beseeched family members and community dwellers to co-exist with HIV persons and stop the stigmatization and discrimination.