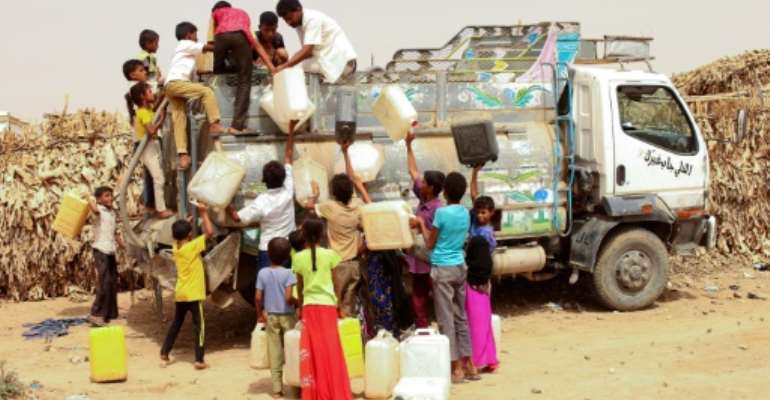 The Yemeni conflict has triggered what the United Nations describes as the world's worst humanitarian crisis, with millions displaced and in need of aid. By ESSA AHMED (AFP/File)

The UN launched a humanitarian appeal for nearly $29 billion on Wednesday as climate change and increasingly protracted conflicts put tens of millions of people in urgent need of aid.

The world body's Global Humanitarian Overview estimated that 168 million people worldwide will need some form of emergency assistance in 2020, including food, shelter and healthcare.

That figure marks a "record in the modern era," UN emergency relief coordinator Mark Lowcock told reporters, clarifying that he was referring to the period since World War II.

Needs continue to rise in part because "conflicts are becoming more protracted and intense," Lowcock said.

"Combatants display total disregard for humanitarian law," with the result that civilians caught up in conflict are increasingly likely to be displaced or traumatised psychologically, he said, adding that the number of attacks on schools and health facilities continues to rise.

"The brutal truth is that 2020 will be difficult for millions of people," Lowcock said. 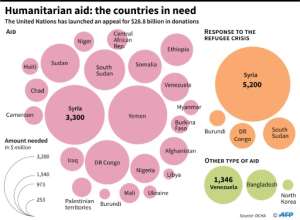 Graphic showing amount needed per country for humanitarian aid, based on an appeal launched by the United Nations. By Maryam EL HAMOUCHI (AFP)

Of the 168 million people who are expected to require assistance next year, the $28.8 billion (26 billion euro) UN appeal is targeting the 109 million who are most in need and whom UN agencies are in a position to help.

The UN is seeking more than $3 billion to address humanitarian crises in Yemen and Syria, the countries most in need.

Venezuela is the country where needs have increased the most in the past year.

The UN sought nearly $740 million for Venezuela for 2019, but as the country's devastating economic and political crisis has intensified, that figure has risen to $1.35 billion.