Revisiting The 1956 Un Plebiscite On The Future Of Western Togoland 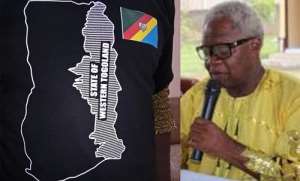 WHEN the Busia Government expelled “aliens” from Ghana in 1969, and this was reciprocated, for god measure, by Nigeria in 1982-83, it did seem as if co-operation between West African nations was dead for ever.

Yet, ECOMOG (the military "Monitoring Group" -- a body set up by ECOWAS in 1990 to intervene in the civil wars of Sierra Leone and Liberia) succeeded in bringing peace to the two countries.

The irony of the situation is that the initial protocol that grew to make the ECOMOG effort a possibility, was adopted in May 1981 – only one year before Nigeria decided to retaliate against Ghana for expelling its citizens in 1969!

So, in international relations, anything is possible. That's why, if, at the moment, the demand for “separation” by Western Togoland seems to those who advocate such separation, to be worthwhile, they should answer this question: suppose ECOWAS begins to implement in reality, some of its more important protocols? Residency (for instance); a common currency; harmonised import duties leading to complete free trade amongst ECOWAS members: if these are achieved (despite the inherent problems), of what PRACTICAL use would “separation” be to Western Togoland?

In the spirit of ECOWAS unity, didn't Nigeria and Ghana sink their differences and jointly contribute to the ending of hostilities in the Ivory Coast civil war? That was a situation in which two Anglophone countries agreed to risk shedding blood to save the people of a Francophone country, wasn't it? When did the world cease to be told by know-all journalists that the differences between Aglophone and Francophone Africa were insurmountable?

So, cool heads CAN bring a lasting solution to the Western Togoland problem. For let me ask again: even if Western Togoland were to be able to -- say -- militarily capture the Akosombo Dam (as some of the advocates of a separate Western Togoland have been threatening on the Internet!) of what use would the power generated from the Dam be to Western Togoland, if Western Togoland found no customers for the power? If you think that's a rhetorical question, answer this: hasn't Ghana already got long-standing agreements with its West African neighbours regarding power-sharing?

Secondly, suppose the agitation for the separation of Western Togoland from Ghana were truly based on a suspicion that there may be oil deposits in that part of Ghana and that politicians from that area greedily want to position themselves ready to pounce on the proceeds. Here again, haven't we seen West African nations happily co-operating with one another and agreeing to international arbitration on the demarcation of areas offshore that contain rich oil deposits? Nigeria -- often regarded as an aggressive entity -- did agree to an international judicial finding on Bakassi, didn't it? And didn't Ghana and the Ivory Coast also reach a similar, amicable settlement? Yet the presence of oil in disputed territory is supposed to be a sure-fire casus belli, isn't it?

So then, if, on the basis of potential economic co-operation, the secession of Western Togoland could be deemed unnecessary, what else could be firing it up? A laughable suggestion has emerged that it's because our Finance Minister forgot to mention Volta Region roads in his budget statement to Parliament in early November 2019 that the Separation was declared!

But isn't that far-fetched? Hadn't people been already taken to court in May 2019, for preaching secession? Hadn't the case against them been withdrawn by the state, for unstated reasons? If the state had offended the people of the Volta Region by the budgetary gaffe, wasn't the withdrawal of the case against the secessionists an adequate “diplomatic” apology -- that is, one that had not been publicly vocalised but was effective in every respect, all the same? Isn't "body language" supposed to be of great validity in international diplomacy?

No, the Western Togoland agitation has deeper roots. Maybe we should call what the Nigerians have been asking for, in their own cirumstances, namely, a “national conference” and let it all hang out.. We might all be shocked into a realistic appraisal of our own conduct: You say I am “ethnocentric” because of A, B, and C. Of course, I'd retort by equally asking you, what about D, E and F?

Are we capable of handling it? The answer is Yes! When the alternative is stark enough, people concentrate their minds on important things and leave out the trivia.

Look at this: if anyone had ever suggested that the Irish Republican Army (IRA) and the Northern Ireland Unionists could sit down together with the British Government ( the despised John Bull) and talk and talk and talk until they reached what was called the “Good Friday Agreement”, who would have lent such a suggestion credence? Nevertheless, it happened.

In our case too, the leader of the Homeland Study Group Foundation has already, if not offered an olive branch to the Ghana Government, at least voiced out what could please him. “Don't arrest my 70-year-old wife!” he has cried. “Don't detain my followers. Invite me instead!” He might be trying to trick the Ghana Government again. But trickery eventually comes to an end, doesn't it?

The Ghana Government should take him at his word and expose him if he goes back to trickery again. It can say to him: “But we dropped the case against you and your followers! Yet you went ahead and made your Declaration of Independence! What guarantee do we have that if we allow your wife to join you where you are, you won't do something worse?” Assuming that the HSGP desires to be accorded international sympathy, such waywardness would work against it, for sure.

I am afraid that its with such thrusts and bursts that politics sometimes works. It's as illogical as it is tiresome. In recent months, Ethiopia (for instance) has been showing the world how this tiresomeness operates. I am sorry to be unable to sketch the whole story through, but please believe that the current goings-on in Ethiopia demonstrate how easily human beings can fall prey to inconsistency and hypocrisy. They say they want “A”. But if you give it to them, then they move to “Q” (!), having jumped all the way to that letter, while blithely omitting all the letters that should, logically, have followed “A”!

You see, some political demands are emotionally-based and not on reality. In dealing with them, therefore, one should have the word COMPROMISE written on the back of one's hand so that every time one wants to throw up one's hands in the air, the word can unfailingly catch one's eye. Definitely, emotional blackmail is a child's game, although grownups play it all the time!

Actually, it is a pity that the Western Togoland issue has not been laid to rest, for the UN did try its best to solve it in 1956-57. The UN appointed a Plebiscite Commissioner – a Mexican called Eduardo Espinosa y Prieto -- who was completely neutral. Also, iIt was the first-ever plebiscite to be organised by the UN to ascertain the wishes of the population of a UN Trust Territory. So, the UN tried to go the extra mile to ensure that it would be fair and acceptable to them all and thereby set a good precedent.

However, the trouble was that there were actually two questions, instead of one. The UN was only concerned with the fate of the people in the Trust Territory; but the people there were ALSO interested in whether the Ewes should be united – an issue with which the UN was NOT then concerned, since its mandate only covered the English/French division of the territory into British and French-administered Trust Territories! Colonialism, as a whole – and “trusteeship” was an element of colonialism – was basically unconcerned with the division of peoples as such.

Should the Ewe unification question have taken precedence over the “End of Trusteeship” issue? Maybe. But if you were a UN diplomat, would you have "unnecessarily" COMPLICATED the UN issue by adding the Ewe unification problem, given the fact that the UN was obliged by law only to concern itself with the individual, separate Trusteeships, as and when different circumstances (like the impending independence of the Gold Coast) arose and needed to be addressed?

We cannot go back into history now to address the issues that the UN dodged. But man-made problems, HOWEVER INTRACTABLE, must be solved by men. I, therefore, hope that the people of Ghana – and we have been “Ghanaians” for 62 years since the plebiscite – can be MAN enough to sit down round the table and say to history: “You want to destroy us with the remnants of legalities. But we won't allow that!” Knee-jerk reactions will be completely out of order, in 2019.

The situation today, I daresay, is completely different from what it was in 1956-7. The AU didn't exist then. Neither did ECOWAS. You cannot create instruments for solving disputes, and then when disputes do rear their heads, you turn your back on those instruments.