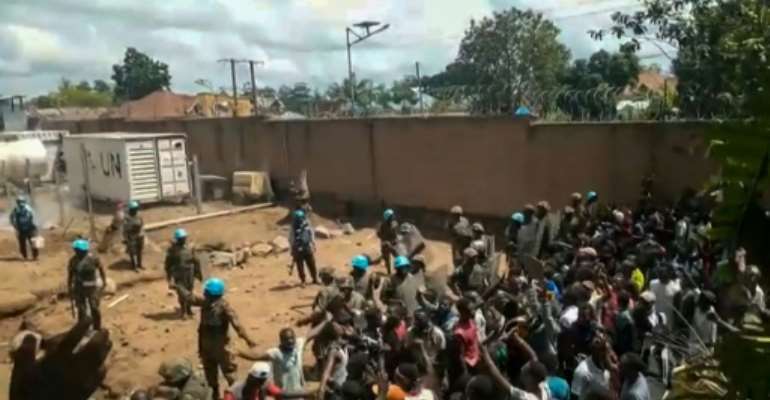 Crowds defied warning shots fired by Congolese forces and stormed a UN camp, which had apparently been evacuated, in an angry protest over killings by an armed militia in the eastern town of Beni. By Ushindi Mwendapeke Eliezaire (AFP)

At least four protesters were killed in eastern DR Congo on Monday, the military said, after angry clashes erupted over the perceived failure of UN peacekeepers to stop deadly militia attacks.

Crowds defied warning shots fired by Congolese forces and stormed a UN camp, which had apparently been evacuated, after rioting broke out in the eastern town of Beni.

The violence was prompted by the killing overnight of eight people in Beni, the latest attack blamed on the Allied Democratic Forces (ADF) militia, which has plagued the area for years despite a large UN peacekeeping presence.

Dozens of protesters broke into the UN camp and set fire to parts of it after a crowd of several hundred had also set fire to the Beni town hall, partly damaging it.

Investigators were still determining the origin of the gunfire, the prosecutor said.

The UN mission said peacekeepers fired warning shots in the air, but none were aimed at the protesters. An AFP correspondent at the scene said Congolese army and police also fired shots.

The UN mission said peacekeepers had fired warning shots in the air, but none were aimed at the protesters. By Ushindi Mwendapeke Eliezaire (AFP)

Earlier, the presidential office had announced the DR Congo and UN peacekeepers will launch "joint operations" to beef up security in an eastern town where massacres by the shadowy group have incensed the population.

North Kivu provincial authorities decreed an indefinite dusk-to-dawn curfew in Beni and the surrounding area after the rioting.

Army spokesman Colonel Mak Hazukai confirmed that the town had been attacked by armed men overnight, telling AFP that "the enemy entered the Boikene quarter and killed eight civilians".

The killing has been blamed on the ADF militia, a group that has its historical roots among Ugandan Islamists opposed to Uganda's President Yoweri Museveni.

The planned joint operations aim at "ensuring peace and security for the civilian population," the presidency said after an emergency meeting with the UN force, known as MONUSCO.

The armed forces of the Democratic Republic of Congo will also set up an "advance headquarters" in Beni, it said in a statement.

Map of Democratic Republic of Congo locating Beni.. By (AFP)

There were no details as to when the operation would begin.

The UN mission issued its own statement, saying it would "strengthen cooperation with its partners and work closely with the authorities to jointly find solutions for the people of Beni."

The army launched an offensive in the Beni area on October 30, vowing to "definitively wipe out" armed groups in the lawless east.

But in response, the ADF has carried out a string of massacres, apparently to discourage people from collaborating with the military.

Seventy-seven civilians have been killed in the Beni region since November 5, according to a not-for-profit organisation, the Congo Research Group (CRG).

But it has struggled to make headway in the vast DRC beset by armed groups as well as entrenched poverty and poor governance.

On Monday, the speaker of the country's parliament, Jeanine Mabunda, said MONUSCO's mission "cannot be limitless".

"There is an unease over the presence, the cost of MONUSCO in the DRC, and the results obtained," Mabunda said in Paris.

She said it was "legitimate for people to ask why this force is still in the DRC."

Beni, in addition to being in the front line of militia violence, is also the epicentre of an Ebola epidemic that has killed around 2,200 people since August 2018.

On Friday, the World Health Organization (WHO) said fighting in the region could jeopardise an opportunity to end the outbreak.

In the neighbouring province of South Kivu, the Minembwe region has been roiled by clashes between the Banyamulenge -- a herder minority which historically hails from Rwanda -- and ethnic Congolese groups.

The DRC's powerful Roman Catholic Church on Monday said "foreign troops" were fuelling these clashes -- an apparent reference to neighbouring Rwanda and Burundi.

These troops "are using these community conflicts to fight on Congolese territory," Monsignor Marcel Utembi, head of the DRC bishops' conference (Cenco), said in a statement.

Government extends electricity to seven communities in Savan...
35 minutes ago